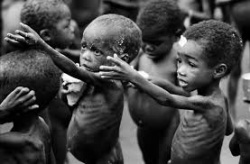 The poor man died and was carried away by the angels to be with Abraham. The rich man also died and was buried. Luke 16:19-25

Take the earth’s resources from the poor.

Rob them. They can’t fight back.

They have wives and children to feed.

Yes boss. Sure will boss.

Let them do all the work, stretch

Them on the rack of survival. Grind them

And beat them and terrify and mistreat

Them. You're the wrecking ball of the Pharisees.

Cheap labour is exactly what we need.

That to avoid famine the Irish poor

Should eat their own babies. The proposal

Was indeed modest because the famine came

Anyway in the 1840s while the warehouses

In Liverpool, Bristol and London were stuffed

With grain. The poor couldn’t pay.

Their story's always the same.

They are gone but not forgotten.

The global poor have nothing except their bodies

To sell. Exploitation that’s what they’re for.

Don’t spoil them by being kind.. Avoid paying taxes

If you can. The poor only waste it on luxuries like food and clothes.

A few crumbs to charity? Maybe. Just a few thousand.

Might get me noticed while I accumulate more unearned income.

Camels and needles and eyes

In the end there’s no disguise!

Killing off the Elephants ►