Out of the Ashes: Frieda Hughes, Bloodaxe 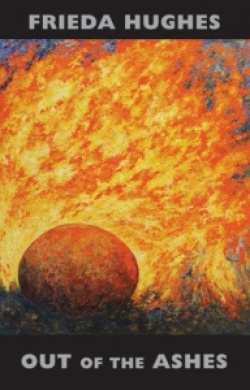 In her extensive and valuable foreword to Out of the Ashes, which brings together work from four previous collections, Frieda Hughes explains that the importance of her parents’ poetry only dawned on her when she found Sylvia Plath and Ted Hughes were both on her school curriculum: “I had to get special dispensation to avoid ‘learning’ about their work on the basis that, if I did badly, it would unbelievable, and I did well, it would be thought that I had cheated.”

She had wisely turned down her father’s offer to help her in the study of his and her mother’s poems: “His idea of his own poems, and the examiner’s idea of his poems, would probably be two very different things.” How true.  Afterwards Frieda Hughes says she resolved not to read any of her parents’ poetry for fear that her owns poems would become ‘contaminated’ by their influence. Whatever poet she was to become, “I wanted to be my own poet, and if others were destined to  compare me to my parents, as they inevitably would, saying that I was surely influenced by them, then at least I would know they were wrong. I wanted to know that my voice was my own, for myself. “

Despite her perfectly believable protests that she avoided reading her parents’ poems as she was growing up, you can often hear the stark rhythms of Ted Hughes and Sylvia Plath – two very different poets – in their daughter’s work. There is the brutality of this poem about her grandmother, Aurelia Plath:

It was years before I dug my grandmother out

Beneath the black stones I had

Weighted her down with.

The imagery of ‘Hysterectomy’ is equally tough:

My disease will be stripped out

And, neatly sewn, I will end here.

Unlike her father and mother, Frieda Hughes is also a painter. The front cover of this collection is a picture called ‘Fire Series 1’, which she painted after her property in Wooraloo, Western Australia, was at the centre of a huge bushfire in 1997.   It incorporates a boulder which Hughes has said ”is a kind of stone which is often egg-shaped and exfoliates its layers like an onion”.

‘Preparing the Ground’, another poem about her grandmother, imagines a scene in which she is nagging Sylvia to leave Ted, “chipping away at her / As if she were an egg, / To be broken and beaten / And turned into something else.”

As if the reader is a moth, attention is inevitably turned to the poems about Ted, Sylvia and Frieda’s brother Nicholas, of which there are more than a few.  There is also a poem about Assia Wevill, whose relationship with Ted Hughes led to the break-up of his marriage with Plath. Wevill killed herself and her daughter six years after Plath’s own suicide. Frieda’s poem is titled ‘Assia Gutmann’, calling her by her maiden name: “I’d no idea / How my mother’s face reflected / In the polished coals of her eyes, / So that she saw right through me …”

‘Poet with Thesaurus’ is tender about her father and mother: “This, said my father lovingly, / Stroking the beat-up paperback like a small cat,/ Is the book your mother kept beside her / As she wrote those incredible poems.”

‘Firstborn” talks of being born “ new and bloody … / In arms that could never / Hold me long enough.” ‘Sleepwalking’ wonders

Did I watch my mother’s face

As she left us bread and milk before

She shut us in and Selloataped our door:

Did I hear the silence

When she ceased to breathe,

Her head in oven,

Body on the floor?

Foxes crop up regularly in the poems, and so do crows, for which her father had a certain literary fascination. ‘Verbal Warning’ is Frieda’s answer to those who say she should not write about foxes or crows, or indeed other animals, too: “There are those who believe // … that several words / My poet-parents chose to use / Cannot be re-used by me / Without accusations of imitation.” You begin to appreciate what an impossible position she is in, as a poet.

Yes, there are poems about other subjects, such as the Labour government’s dilemma over what to put in the Millennium Dome (‘Nebuchadnezzar’); or being snubbed by a famous figure at a London party (‘Nemesis’). Out of the Ashes brings together work from four collections: Wooraloo (1999), Stonepicker (2001), Waxworks (2002), and The Book of Mirrors (2009). In the foreword Hughes explains how, having first banning herself from writing poetry “because I felt I’d be too exposed, too easily aimed at …” ,  after an incapacitating bout of ME in Australia she began to write, no longer fearing the opinions of others. However, she began to use allegory as a way of expressing herself less directly. Her third collection Waxworks assembles mythological and historical characters; in The Book of Mirrors a sort of family is created, including characters called Stonepicker and Stunckle.

Frieda Hughes has clearly not set out to write endless poems about her family, but it is a subject that both she and her fascinated readers are drawn back to again and again. It is not just the suicide of her mother, and the death of her father; in 2009 her brother Nick killed himself at the age of 47. She says in a note at the end of the book: “Our father’s death in October 1998 provoked unexpected family difficulties for both of us, but, for my brother, in the years that immediately followed, those difficulties became a catalyst for depression from which he had never previously suffered or shown signs of, but which subsequently led to his death.”

As she says in ‘The Trouble with Death …’, “it’s never one death … my brother, too, who couldn’t wait to leave”:

In the early morning, I hear the wind

And look inside myself to see my own horizon

Obscured by a confusion of aimless turbinations

Of cremation ash and powdered feathers.

In the swirls and eddies of aborted expectation,

Without direction or purpose,

They perpetually thrash themselves into

One futile circuit of my wilderness after another.

Because of her fraught family’s dramatic and tragic history, Frieda Hughes will forever be caught in the glare of the public eye; because of that history, poems about her family will always be fascinating to readers.  Her poetry is a brave attempt to accept and confront this, and also to blaze her own trail.

Frieda Hughes, Out of the Ashes, Bloodaxe, £12

Excellent review, Greg, of what sounds like a fascinating book. I might be tempted to add this to my Christmas list - despite its obvious dearth of “merriness”.