All That Jazz and Other Poems: Adrian Green, The Littoral Press 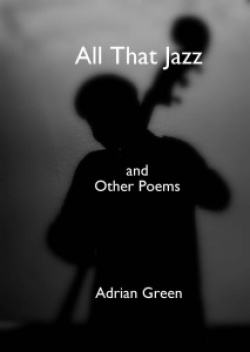 The first poem in the first poetry book I bought, way back in the early 1970s, consisted of two lines: “He breathed in air, he breathed out light./Charlie Parker was my delight.” The poet was Adrian Mitchell but I wasn’t quite sure who Parker was. After some research, and some vinyl borrowed from the library, I found out that Charlie “Bird” Parker was one of the greatest saxophone players ever to have lived (and breathed).

With this collection, another Adrian has joined the rich tradition of poets writing about jazz. Green duly name-checks many of the jazz greats in his poems – Coltrane, Davis, Gillespie, Bechet and so on – but the music is much more likely to be heard in an Essex pub than a classic jazz venue. He writes in ‘Hearing Straight, No Chaser in an Essex Pub’:

as ’trane or Miles,

but this cat has an Essex name,

his horn was made in China

and the chorus learned in Barkingside.

Green’s love of jazz shines through in every one of the 30-odd poems in the first half of this collection. It doesn’t matter that the music is played in a seaside bandstand or a pub “with fading posters on the walls/and tables etched with glass-marked rings”. The music’s the thing and Green, who fittingly runs a traditional jazz club in Southend, writes with the undiluted passion of the enthusiast, as in ‘Simon Spillett plays Coltrane’:

and then a rest

through pause and introspection,

In such phrasing Green attempts to capture the essence of jazz in all its dynamism, lyricism, energy and unpredictability. But this is by no means a book for jazz lovers alone. The poetry is often laced with humour. In ‘Improvisation in a Southend Bar’

there is an audience of four:

five in another conversation;

and the man waving his arms

as if conducting Mahler.

In the second part of the collection too there are several poems about “those shambling men/denied a hostel bed” and scenes of the bleak morning after the night before with “cardboard cups and burger debris”. Green has an eye for such details and an attachment to places in which he is clearly grounded, even if they have all but vanished as in ‘The Town I Knew’:

The town I knew exists no more -

only the memories are true:

by the Orpheus underground,

Regent and the Odeon -

A similar elegiac tone is struck in poems on childhood and family, which are more often than not injected with affectionate humour. There are also forays into pure romantic lyricism. In ‘The Lost City We Thought Was Indestructible’ he writes:

is privy to its peace,

laid down by medieval storms.

For me, though, the crowning achievement of this collection are the jazz poems through which Green ably conveys his intimate knowledge of the beauty, vibrancy and perceived dangers of “the unclassified music/our parents/did not think/to warn us about.”

Adrian Green, All That Jazz and Other Poems, The Littoral Press, £9

SPOTLIGHT: Poets Out Loud in Cockermouth ►