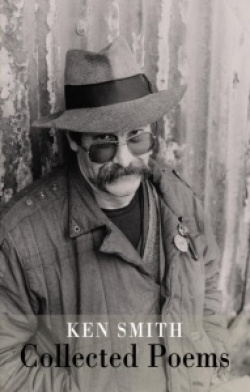 How does one sum up the collected works of a writer when the book weighs in at a massive 630-odd pages of richly various poetry, in a way that truly does the man justice? From his first collection, Ken Smith produced some of English poetry’s most remarkable poems. He was neither entirely mainstream, which he dismissed as “the Rupert Bear School of Poetry”, not incredibly experimental but somewhere in between.

He was what might be called a “big” poet; not necessarily in the length of his poems (though he wrote some longish ones) but in the thematic sense. Even his early poetry touches on, for instance, political violence. The title poem of his early collection, The Pity, quotes Mao Zedong; “I cut my hands on the cords at the strangling post / but no blood came from my veins; / instead of blood I watched and saw the pity running out of me.”

If it could be said that a poet has an ur-subject, one that underlines everything they writes from the beginning to the end of their career, then Ken Smith’s is male violence, toxic masculinity and the way it destroys not only the women and children but the men themselves who live it, from the wanderers and ne’er-do-wells at the bottom to the mercenaries and tyrants at the top. One of his most representative poems, ‘Fox Running’, is a long, loping narrative of a man on the edge of collapse, running through a post-industrial landscape away from a normal life that seems to have thrown him out:

once upon a long time

I was a good dog

I ran around town

with the other good dogs.

home by the moon

through the late night streets

in a bad baritone singing

what a terrible thing

is a pub with no beer

I could spend most of this review just on this poem, but there is so much more to this book. Ken Smith’s poems roam from the plains of America to the mountains of Chechnya, dealing with the  jealousies and historic hurts of tribalism and nationalism in eastern Europe, the inmates of Wormwood Scrubs where he worked in a major residency and the destruction meted out on communities by Thatcherism, seen in his book Terra for instance.

But at the heart of his poems, there is his own hurt: a poverty-stricken, isolated childhood blighted by the violence of a father who was always angry and resentful about his lot. His poetry is muscular and edgy, even masculine, but there’s also a search for love and beauty, for something delicate and feminine among the ruins of various civilisations, or of the post-war consensus; even a desire for solidarity and unity with the natural world:

oh such a surprise. And then

before the leaves begin falling again.

But this time the whole tree has fallen

With a great echo and scurry through the forest.

This is an enormous book and a review can only really scratch the surface of all the riches in it. By the last poems, he’d moved through his own upbringing in rural Yorkshire and urban Leeds, through the American wilderness, Thatcher’s Britain, the various conflicts of the Balkans and eastern Europe and had reached the time of Bin Laden and the wars in the Middle East, in poems that are intense, luminous, at times dream-like, at times startlingly clear. Full of passion, his focus was always on the victims and the perpetrators of violence and oppression, and his sympathy with the oppressed, with the lost and the wanderers.

And throughout all this, there is no sentimentalism, no mawkishness, just great poems. I can’t praise this collection highly enough.

Cut off Your Telephone, WH Auden in Theatres ►