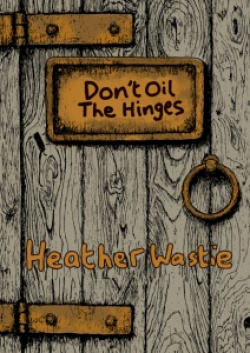 It’s not a question of sitting around, waiting for the muse to turn up. As a local poet laureate you have to get on with the job, look for inspiration in all sorts of places. That’s one of the messages that emerges from Don’t Oil The Hinges, by Heather Wastie, who spent a year as Worcestershire’s poet laureate in 2015-16, and has now published a collection of poems plus blog extracts that lift the lid on that year – and reveal what being a poet laureate can entail.

How did she get the job? She wrote the application, submitted two poems, was interviewed as a longlisted poet, then performed at the Guildhall in Worcester. She had previously applied for the job in 2011. One of the submitted poems, perhaps unsurprisingly, was titled ‘Worcestershire’, “a county that wooed me on a walk / from Feckenham to Inkberrow / in shady lanes gasping with garlic and bluebell”.

The headline in the local Kidderminster Shuttle sounded a note of scepticism: “County’s poet ‘waffles’ on the podium.” But Wastie doesn’t claim to have been misquoted, and instead admits cheerfully: “It’s true, I did waffle. Perhaps using that word in a press interview wasn’t a great idea, but it made me laugh afterwards. And yes, I’ll milk it for all it’s worth. Here’s to the next twelve months!”

However, in her poem ‘Poet Laureate’s Promise’, she bravely pledges “my poems will never be waffle”. Was it a promise that she was able to keep?

There are poems about a cafe in Droitwich, which regularly hosts spoken word; an exhibition in Dudley; one inspired by a visit to a care home; some written for a football-related poetry performance; a poetry performance in the fanzone at Rugby during the Rugby World Cup.

Also in this collection are poems that Wastie made earlier, as it were, such as those that came about during her spell as writer in residence at Kidderminster’s Museum of Carpets: the resulting collection Weaving Yarns was launched during her laureate year.

There’s a poem about a pub in Kidderminster, the Boars Head, where she and fellow compere Sarah Tamar ran a monthly spoken word and music night for four years; a couple in Black Country dialect; and another for a Women’s Institute workshop on women in the first world war.

You have to be energetic to be a poet laureate, and Heather Wastie certainly was. There are poems about canals, as you’d expect from a poet based in the Midlands, a region almost awash with them. But in Heather’s case the poems formed part of a collaborative show with Kate Saffin about the women who were trained to work canal boats during the second world war. Wastie was also one of 40 poets around the UK who were asked by the BBC to write a poem about their county for National Poetry Day. Heather was commissioned to write about two – Herefordshire as well as Worcestershire. ‘Squeeze Me’ concerns eating apple varieties deemed to have originated in Worcs; bittersweet cider apples grown in a nursery in Herefordshire; and names given by Ledbury cider making firm Westons to their oak fermenting vats.

She concludes the collection with ‘I had a Gift’, a sonnet which is said to have helped her to win the laureateship. It’s well chosen as the final poem, a profound meditation on a bouquet of flowers and a vase which is not tied to any particular place. It helps the reader to draw breath after a year in which Worcestershire’s poet laureate has dashed about the county and beyond, and knocked out more than a few pertinent poems along the way. The apt title of this collection is a quote from that poem about the café in Droitwich that serves as a metaphor for poetic inspiration: “I don’t oil the hinges, he said. / When something enters, I want to know about it.”

Will it appeal beyond the boundaries of Worcestershire? Well, it should, and not only to those wannabe local laureates looking for tips on how to gain such a post in what seems to be one of poetry’s growth industries. From Stourport to Bewdley, from Droitwich to Redditch, and from Evesham to Pershore, you can’t help but warm to Heather Wastie’s enthusiasm, creativity, and zest in putting poetry at the heart of a community.

American Life in Poetry: Here and There ►