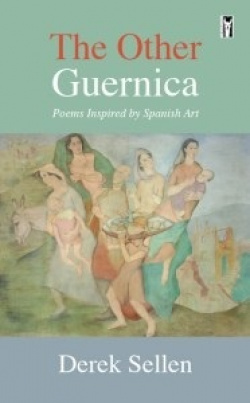 Readers who are unfamiliar with Spanish art might be expected to find 65 poems on the topic something of a challenge. Yet such is Derek Sellen’s passion for his subject and so varied are his approaches to it that this collection becomes much more than another book of ekphrastic poetry.

The poems, based on artworks from the 15th to the 21st century, are arranged in four sections; they cover individuals and relationships, war and violence, art and artists and place. There are brief notes and potted biographies and, best of all, links to images of many of the paintings on the publisher’s website.

While the poems stand up perfectly well without the images, I certainly found that looking at the pictures alongside the words added to the richness of the reading experience. Take the first poem, ‘Aesop’. I instantly wanted to turn to the image after reading the description of his face, “a gaunt arrangement of bone and muscle,/someone who knows the quirks of pride and greed”.

Another feature of this first poem, and one that which runs throughout the collection, is Sellen’s ability to suddenly wrench the reader out of the past of several centuries ago to the present day:

By the threshold of power,

leaning slightly back in wry appraisal,

in the atrium of a global bank or the hallway of a parliament,

he sees the fox and cockerel in you.

Sometimes the effect is disconcerting when seen through modern eyes. In ‘Sad Inheritance’ based on a painting by Joaquin Sorolla, a monk shepherds a crowd of naked boys into the sea, his hand on the shoulder of a child on crutches:

Here is the paradigm

of our suspicion: incapable of belief

in his heroic charity, we see sex, we see headlines.

Elsewhere, the effect is liberating. Without introducing a timeshift in ‘The Bearded Woman’, inspired by a 17th century painting, Sellen seems to give a nod to the ongoing debate on transgender issues:

Jose de Ribera presents me to you as I am,

balding, bearded, with the broad brow of a man

and the breast of a woman. I bare my dark nipple.

Sellen is equally at home when writing about 20th century paintings. ‘Two Paintings of Lovers’, in which two couples in separate artworks lounge together delightfully in their very different ways, is one poem that really does benefit from seeing the images alongside the words:

Adam and Eve are in their workday clothes. His shirt’s

unbuttoned down the chest, she’s covered to the neck…

The other couple on the sand lack the nuances of clothes; her

Sellen employs different styles throughout the collection, from prose poems, as above, through sonnets, free verse and concrete poetry. Moods shift constantly, from tragic to tender, from comic to melancholic, from nostalgic to satirical. ‘Apollo Flaying Marsyas’ is marked by grim humour: “Marsyas is grey with pain, his mouth the gateway of a scream ...” How do you face such a painting? Easy:

… go to the shop and buy the image – mug or place mat.

A masochist-to-sadist gift. The art is exorcised. A piece of tat.

Poems on some of the more familiar Spanish paintings are short but dynamic. Picasso’s mural ‘Guernica’, a portrayal of the bombing of the Basque town during the Spanish civil war, runs to only eight lines but bears the weight of decades of meaningless violence:

It speaks for London in the blitz, Dresden razed by fire,

My Lai, Fallujah, the office workers in the falling towers…

It burns through any veil, it distorts with horror:

In an accompanying note, Sellen points out that the ‘veil’  refers to the fact that when Colin Powell visited the UN to seek approval for the Iraq war, a reproduction of Guernica in the UN building was covered to avoid any jarring images. Another well-known painting, Goya’s ‘Third of May 1808 in Madrid’, is given an understated matter-of-factness in the poem ‘The Firing Squad’, thus highlighting the banal horror of the situation. It is a sonnet written from the point of view of a member of the firing squad:

I am the third soldier from the left, tan boots, a tall hat,

ducking my head to squint along the gun. What else?…

and spend our pay – the town has bars and whores…

Canterbury-based Sellen, who recently won the city’s international Poet of the Year competition, has produced a collection full of stark, powerful imagery. For many readers the chief pleasure might be found in the modern parallels and contemporary allusions he teases out of the artworks. Ultimately, however, the main source of satisfaction and achievement derives from the imaginative richness and dramatic economy of phrasing that is surely the verbal equivalent of the masterly brushstrokes of the paintings he writes about so well.