The Cultural and Emotional Landscapes of Theophilus Kwek 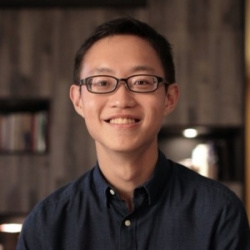 I've been intrigued by the prolific creative output of Theophilus Kwek, a Singapore-based writer and researcher, for some time. He's published five volumes of poetry, most recently The First Five Storms (2017), which won the New Poets' Prize; he came Second in the Stephen Spender Prize in 2016, and is shortlisted for the Singapore Literature Prize this year. He also serves as Co-Editor of Oxford Poetry and Editor-at-Large for Singapore at Asymptote; experience which reflects in the fruitful insight he shares in this interview.

Congratulations for being shortlisted in the Singapore Literature Prize this year! As you are currently based in Singapore as a writer and researcher, what can you tell us about how the literary scene differs between Singapore and the UK?

It's hard to consider the two in isolation because in one sense, Singapore writing owes plenty to British influence. We have colonial history to thank for our place-names, mission schools, legal strictures, and literature textbooks, for a good number of entrenched prejudices, and for the fact that English is our first, administrative language. Consciously or not, many of our writers have drawn heavily on these elements, or tried hard to escape their orbit. More directly, some (including newly-minted novelists Sharlene Teo and Rachel Heng, as well as prominent poets Alvin Pang, Koh Jee Leong and Toh Hsien Min) have spent formative years in the UK, and participated actively in British writing circles.

But this postcolonial narrative is only one way to tell the story of Singapore literature. Writing has flourished on this island for at least eight centuries, mingled with the literatures of those who journeyed here or were forced into coming here. Our non-Anglophone literatures derive from storied traditions across the Malay Archipelago, and have much in common with today's shifting cultural diasporas: Chinese, Ceylonese, Tamil, Burmese and Filipino, just to name a few. In their day-to-day living, Singaporeans also continuously translate between all the rich, polyglot realities of this island.

All this is to say that Singapore's literary scene today is on one hand far more colourful than the UK's, and at the same time far more obsessed, at a fundamental level, with the question of identi(ties). If platforms like The Complete Works and the Jhalak Prize are only beginning to expand the horizons of British writing beyond an assumed (white) heritage, the Singapore literary scene has long been driven by a continuous cycle of inventing, questioning, and remaking tradition. While some writers are keen to articulate a shared 'Singaporean' frame of reference, others are more interested in exploring future landscapes or cosmopolitan identities, creating a healthy tension between centre and peripheries.

I hear you're currently trying to grow a critical culture in Singapore's relatively young and insular lit scene. How are you going about that and how is it going?

One of the great things about having a more established literary infrastructure in the UK is that you have a continuous critical conversation, driven by writers, readers, academics, and reviewers alike who are sensitive to the histories and developments of various genres. They are also supported by a hubbub of journals, prizes, blogs, newsletters and websites dedicated to literary commentary – not to mention the countless forums, panels, book clubs and late-night pub arguments that take place.

Infrastructure like this is really difficult to replicate in Singapore, where the main media platforms are all owned by the state, and most grant monies can also be traced back to the state. Even independent non-profits like the Singapore Book Council and Sing Lit Station are heavily reliant on state funding. Money isn't everything, of course, but the state's watchful eye has meant that even the little literary criticism that happens here is often safely non-political, and often, as a result, safely irrelevant. When people read a book review or attend a book club, they want to see and hear how this book speaks to their most urgent, lived concerns – not just how gorgeous a writer's turn of phrase is. But most critics make only aesthetic assessments, and as a result, lose a critical mass of concerned readers.

So – baby steps. I review Singapore books (and sometimes productions) fairly frequently, for both independent local platforms (like the Quarterly Literary Review of Singapore) and regional ones (Cha, the Asian Review of Books, Asymptote, and others). In my reviews, I try as far as possible to make a case for socially-engaged writing and criticism, to draw active connections with how we experience life in Singapore. At the same time, I've been leading workshops not just on the 'how to' of writing poetry but also on the histories of Singapore writing, which will hopefully provoke thought on what Singapore writing even is, and how it should speak to the society that gives it community and context.

You were previously placed Second in The Stephen Spender Prize for poetry in translation. Where would you say the importance lies in such competitions that shift attention to consider other languages and cultures?

Well, a lot depends on how these conditions are run – how much effort they put in to solicit diverse submissions, how the judging process works, and of course, the wider literary ecosystem that these competitions operate in. Unfortunately, of course, no judge can be conversant in all the original languages, so the English-language translation (if the prize is for a translation into English) is always going to carry more weight than the starting text. But there are always ways to spotlight non-Anglophone writers in these competitions and also, crucially, to protect their rights. The new translation category of the National Book Awards in the US splits the prize money equally between author and translator (like the Man Booker International), while Asymptote's Close Approximations contest, which I previously helped to organize, insists that all the appropriate permissions are procured from the authors and their publishers before submission. And all good translation awards, of course, celebrate and publish the original text alongside the prizewinning translations.

What else have you been working on since your fifth collection, The First Five Storms (2017), was published after winning the New Poet's Prize? Did the prize have a big impact on your work?

I don't think the Prize itself had a direct impact on my work, but winning it certainly reassured me that my writing would have an appreciative audience in the UK! At the time, having only spent a brief while in the UK, I was still learning about the conditions and conventions of its writing scene, a shape-shifting product of audiences, tastes, aspirations, and much else. Peter and Ann Sansom at The Poetry Business, who organized the prize, were hugely generous with their time and editorial wisdom in bringing The First Five Storms to publication, and putting together opportunities for me to speak and read.

In the year or so since The First Five Storms was published, I've explored new ideas and concerns in my writing, mostly to do with my move back to Singapore – and how I must now balance two cultural and emotional landscapes in my head. All the same, I think the poems that have emerged in this season have taken on a more political and urgent voice, and are more eager to speak to questions that go beyond myself: global humanitarian crises, unexpected turns of history, unresolved moral obligations in the present. I don't know where they're headed next, but I hope there's something in them for everyone.

Have you ventured into other forms of writing such as prose?

Yes! In fact, I often tell my fellow writers and friends that I see every piece of writing – my op-eds, creative non-fiction essays, critical reviews, translations, and even academic research papers – as part of the same project: to advance a set of causes close to my heart, and to pursue a world that is more just by shaping creative and critical discourse. I don't see 'creative' writing as a fundamentally different thing to other forms of writing; every genre has a history, purpose, and context that makes it a best fit for communicating a certain set of ideas and convictions to a certain audience.

For me, this question touches on the deeper question of why I write. Because if perfecting my craft or expressing my emotions were the goal of writing, then I probably wouldn't do it at all.  Writing, I believe, has to be about something other than oneself; it has to thrill, protest, and persuade in service of a bigger cause. The form is merely a tool for reaching an audience effectively, and if one believes that what one has to say is important enough, it will not do to be restricted by one genre or another.