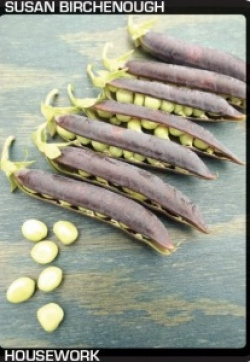 This is a relatively short book – only 20 poems and a total of 30 pages – but it’s perfectly put together in a larger than standard format because of the nature of some of the poems. Susan Birchenough’s deft use of the space of the page needs a larger format because her poems have a tendency to spread across the page in a seemingly random, but actually carefully choreographed way. ‘Brainwaves’, for instance, explodes across the page, breaking up words in order to investigate the various meanings that can come from them.

The title poem, ‘housework’, looks more conventional, though even here she plays with space, while talking of the various boring jobs one has to do. It opens:

Thomas the Tank was on them

In the first verse, the spacing helps drag the line out to reveal the drudgery of the task, and last line of the second verse mimics the task of ironing.

Birchenough is interested in both the sound and the shape of her poems, so much so that ‘Billie Holiday and friends’ can attempt to mimic the sound of the music and voice of the singer in visual form. Another poem is difficult to represent in a review: the first two lines are “papapaaaarpapa/ prup papapaaar”, like a visual representation of scat singing; but to really see how it works you’ll have to buy the book.

Her poems are not simply interesting for their shape and sound, however. She is also a perceptive observer of the world around her, and of the life of a woman as she goes about her life. Poems like ‘I saw it’ and ‘down a side street’ are full of image-bearing phrases that delight and intrigue: “the carpet is full of silences,” “it rumbles above me when/ I walk on Portland Street/ and in 1910 when / a man is pushing a handcart …”

For such a relatively short collection, there is such a lot of interest in each poem that one can’t help but keep returning to them. In fact, I do kind of wish there were more poems; but I also think this is a great introduction to a very interesting visual/sound/open form poet who’s interested in both the sound and shape of language, as well as its meaning.