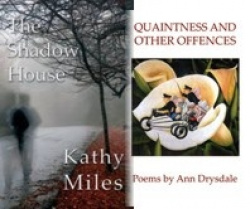 Drysdale and Miles  have different writing styles, however both poets tend to end-stop every stanza so there is no rolling on of the sound of the words. This was the greatest disappointment for me as I felt I was being pulled up short at regular intervals. Drysdale has an ear for sound but mainly for rhyme. She can be very witty and for those that like the anecdotal poem-with-a-twist there are plenty in this collection. Some of the lighter verse is great fun. ‘The Only Criteria is…’ takes issue with a publicist who took the writer’s singular ‘criterion’ in a press release and made it into the plural ‘criteria’:

I’m as peeved as pedant can be.

I abhor the misuse; the linguistic abuse

‘To My Last Publisher…’ (56-57) spoofs Noel Cowards’ ‘What a swell party this is’ whilst referring to Browning’s ‘My Last Duchess’ in its title. It is a joke on the publishing industry.  That is not to say that Drysdale doesn’t do sincere: ‘How the Emperor Shun paid for his Cucumber’ describes a woman whose partner has died. She is saddened that someone has thrown out his old raincoat. So, in sleep she astral-travels to steal it back from a charity shop. Her ‘fingers can fumble the fuzzy past in its pockets/ Till I fall asleep in the Marks-and Spencer hug of it’ (41). The Emperor Shun is a character that also has the gift of astral-travel. I like this kind of thing but felt the structure of the poem worked against the delivery of the story. Its end-stopped stanzas dislocated the inter-woven nature of the two stories.

Drysdale displays literary knowingness with poems such as ‘Faking it: for Matthew Arnold, in Dover’ and ‘Dishcloths of Heaven’. In the latter someone writing on the back of scrap paper in an exam, discovers that on the reverse there is a poem; the examinee chooses a soft pencil to write with because she is writing on the back of somebody’s dreams. This feels like two experiences - taking an exam, and the idea of discarding poetry competition entries - being brought together with Yeats’s ‘tread softly, because you tread on my dreams’ (from ‘Cloths of Heaven’). The conceit almost works but the poem seems to be trying too hard.

Drysdale also offers self-conscious reflections upon being a poet. ‘Dear Heart…’ opens with ‘I’d like a word with you, my inner poem’ (34). In ‘Cliché’ she acknowledges the cliché of Christmas Eve walking the dog and hearing birdsong - possibly a nightingale? She writes:

Or Shelley’s skylark. He’s been done to death…

So what on earth can one more poet do?

Are unbecoming in the elderly. (76)

I want to like it, but feel irritated. Why not say ‘no, not another poem’?

Where she teams humour with tight rhyme schemes Drysdale is a success. The advantage of regular rhythm and rhyme is that the collection becomes a speedy read. The trouble with so much full rhyme is that it results in a sing-songy tune; the few poems that do not adhere to such rhythm and rhyme throw the reader off course. Yet I would like to read more of these experiments, such as ‘Changeling’ about an abortion: ‘Surely too small to be malevolent?/ Just inconvenient and untoward’ (36).

A poem is more than just its story. I was missing the music and the soul of some poetry. A better balance between strict rhyme and free-er verse would improve the collection. As would less super-self-consciousness. But overall Quaintness and Other Offences (whose title pre-empts this type of criticism)  is pleasant and entertaining.

Kathy Miles’s  collection suits me better. There are images that work beyond story: ‘Out of the tender air come ducks,/ snaring in on the current’ (‘The Coming of Ducks’, 24). There is also a clear sense of place. In ‘Auntie Jean’s Emerald Raincoat’ (42) Lime Street, Jericho Lane, Paradise Street, Botanic Road, the Cunard liners and the runway at Speke all get a mention to confirm that we are in Liverpool. But Miles is not just name-dropping place names; all these words - Lime, Jericho, Paradise, Botanic - are evocative of something mysteriousness in Auntie Jean’s past.

I liked Miles’s descriptive similies too, for example ‘I see tiredness/ like an old dog stoop its weight/ against your legs and shoulders’ (from ‘Bloodlines’). There is space to think inside her poems. Miles tends to use more internal rhyme than Drysdale and for me this helps the poems maintain momentum even with the end-stopping at the ends of stanzas.

A poem needs sufficient velocity to lift it from the page. Each poem must earn its place in a collection both as a separate entity but as an enhancement to the other poems. This is why even though we write a hundred poems, we might only choose thirty of them to go into a book. Nothing should feel random. Some of the poems in ‘The Shadow House’ do feel like random choices. I felt I was slipping into the poet’s world, enjoying nature poetry together with reflective pieces about individuals, but then there would be a poem about school days, Jack the Ripper, or ‘[On] Bumping into an Archangel’. These felt like a wrong turn. Randomness and over-inclusion I recognise as a fault of mine in my first collection, and it may be a general fault of debut collections. I was surprised to realise that this is not Miles’s first collection. However, Miles was my preferred poet here, and if she were to tighten her selection process I would like to read more. I feel a clearer sense of her world may yet come through.

These titles, along with many others, can be found at http://www.cinnamonpress.com

◄ The Trouble with my "R"s