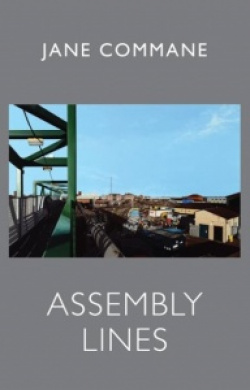 In a BBC Radio 4 broadcast (Start the Week, 21 May 2018) Jane Commane asserted that “poetry has a duty to look at the layers of history … the push and pull between the past and the present”,  and this is precisely what she does in her debut collection of 38 poems which make up a study of Midland towns in post-industrial decline. The subject is timely when our retail outlets are struggling to keep a physical presence on the high street as more and more of us choose to shop online. Commane documents “the shammy camouflage of enterprise zones, the vortex of estates and vast retail shacks hitched upon borrowed cash”.

Commane is very much a poet of place. In her work, we read about the Great Central cut, Coventry – “an ugly / beautiful place” – the shop floor that is purgatory. “Town” is a keyword: she writes eloquently of heartsick towns, nondescript towns, towns that have “lost their song”, forgettable towns and, finally, forgotten towns. Not surprisingly, in these urban scenes we read about our past – the dead car plants, roofless factories and pillbox viewpoints, “the scrim of demolition, broken bricks, concrete, dust”.  In ‘On Discovery’ she writes: “What is any place built upon /   but accumulated silt and memory?

There is a distinct, elegiac tone to her work but not one that slips easily into nostalgia. Ultimately, there is a recognition that we have to move with the times and a hope that we can find a better way for communities to work together in the future.

A fascination with landscape, especially the urban industrial landscapes of the Midlands, informs her writing which is set in a political context somewhere between ‘glasnost’ and ‘things can only get better.’  A literary past is also excavated with references to Anglo-Saxon, especially in the powerful poem ‘Unweather’ which takes its title from Old English “unweder” meaning “storm”. Positioned halfway through the book, this is the centrepiece of the collection.

An interest in maps, as in ‘Love Song for the Ordnance Survey’ is also apparent. The maps take us, at times, away from the factories and into the beautiful rural landscapes that skirt round the hem of the Midlands – the Edgelands.  Poems about the natural world, such as ‘Otters, Avon,’ ‘Seven Horse Secrets,’ and ‘Poem in which a small dog looks into the sun’ provide a sensible and necessary counterbalance to the urban scene.

Commane is not a passive observer. There is a rebellious streak in her work which is more than hinted at in some of the early poems in the collection. In the section headed ‘Sciences’ from the poem ‘National Curriculum’ she writes:

skiving off, you find the footpath brings you

scaling summerhouses, chortling in the breeze.

An afternoon misspent in the study of gravity’s trajectory;

stones chipping the verandahs of the elite.

Some of her poems, such as ‘Sand’, take on a dreamlike quality that verges at times on the surreal while others, such as ‘Folklore,’ and ‘How we fell in love with big data’ are slightly disturbing.

This is an exciting debut from a poet who finds beauty in unexpected places and has already found her own distinctive voice. The cover image of Darren Reid’s painting ‘Crossing the Tracks’ (2014) is a perfect fit as it draws the reader into the urban landscape that is waiting to be discovered within. Recommended.

Poet gets a gong: an MBE for Kate Clanchy ►