We Are All Lucky: Ben Banyard, Indigo Dreams 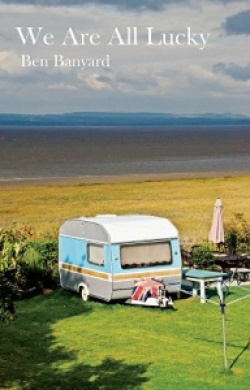 Ben Banyard grew up in Solihull but now lives in Portishead, near Bristol. His work has been published widely in print and online. We Are All Lucky is his first full-length collection and follows his pamphlet Communing (Indigo Dreams, 2016).

The title of this collection was inspired by graffiti spotted by a road sign for through traffic to Bristol airport and Temple Meads railway station. It strikes at the heart of Banyard’s writing which delights in putting a positive spin on inner city life and living. Reading his work is rather like coming across a flowering buddleia on a derelict building site.

There is an impressive range to his subject matter which is set in the West Midlands and Bristol. His world is populated by family, pubs, Balti restaurants, football, shopping and holidays by the sea. It is grounded in the everyday but it is never mundane or boring. The scenes he describes are fast moving with plenty of action to keep his audience attentive. In ‘Wake’the noise going on outside is neatly contrasted with the slower, quieter pace of the funeral reception that is taking place inside the house of the deceased:

Outside in Monica Road an ice cream van chimes,

your cats slide around our ankles.

The iconic cover design by Ronnie Goodyer which comprises a caravan, complete with the Union flag, parked in a back garden adjacent to the shoreline – a common sight on common ground - is the perfect visual accompaniment to Banyard’s poem ‘At the Exhibition’ in which he seizes upon something positive to say about what others might regard as an eyesore:

Why would you take a picture of that? she demands,

and I explain that the caravan’s colours

mirror the sea, the earth and sky.

The sustained image of the opening poem, ‘Book Launch’ in which a book is compared to a ship about to go on its maiden voyage; the serious message about the changing face of our cities in ‘Birmingham’:

don’t sweep away the dirt we earned

or this city’s heart might be too shiny to find

and the observations about how people live in the inner city in ‘Join Us In Creating Excitement’ are just a few examples of some of the well- crafted poems that are to be found in this collection.

That said, writing poems about family and friends is never easy and can bring its own set of challenges. The handful of poems that fall into this category, while acutely observed, would, on reflection, read better as prose. They do not have the pulling power of other poems in the book because, unlike the writer, the reader does not share the emotional attachment that goes with the territory.

Overall, this is a strong collection from a promising writer who has a refreshing outlook on the world. There is a sureness about his writing, a great deal of human warmth, and an engaging sense of humour, as he documents with keen observation everything he sees before him. Recommended.

Ben Banyard, We Are All Lucky, Indigo Dreams Publishing, £8.99

◄ Write Out Loud’s Poem of the Week is 'Random note 1' by Alex J.J.

New faces and YOU at Write Out Loud ►