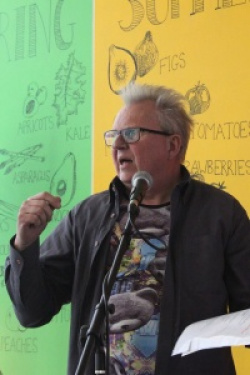 “Had T. S. Eliot been born in the late 1980s I have no doubt that he would be standing on a dingy stage, clad in a Converse T-shirt roaring incomprehensibly about April being the cruellest month.” The Dreaded Press

In the morning I watch the 2012 Olympic torch being lit

HELL is taped across cabinets and lights on the amps

are colourful as those from the cockpit of a F-177 Nighthawk.

wristbands and shout FUCK YOU, FUCK YOU from Disaronno lips.

Superheated noise, smoke and spit blows from the stage. The floor

is white hot with sounds from blustering ferocious guitars, death

The synchronised headbanging is fast, bloody and hair-raising.

During The Walls That Divide Lewy sticks out his tongue, grabs

his axe and climbs on top of a giant speaker that’s in fucking pain.

He looks like the god Apollo but instead of plucking intestines

carving the air with hate while devils fly in with their guns and rockets.

After an encore the moshing crowd stop, strike a suitably classical air,

reverentially raise their arms and, in imitation of the band's logo, a liver bird,

stick out both middle fingers and shout FUCK YOU, FUCK YOU.