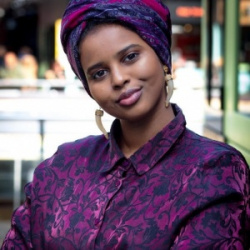 Momtaza Mehri has been named as London’s new Young People’s Laureate. Momtaza, aged 24, will work with the London writers network Spread the Word for a year on youth-focused residencies across the capital. Including a tour in six outer London boroughs: Barking and Dagenham, Brent, Kingston, Bromley, Redbridge and Sutton.

In her new role, she will also co-host a development project for young London poets called The Young People’s PoetryLab.

Momtaza, who is of East African heritage, was selected by a nomination panel including arts bodies such as The Roundhouse, Apples and Snakes, Barbican, South Bank Centre and the Poetry Society and takes over from outgoing Young People’s Laureate Caleb Femi.

Momtaza is a poet, essayist and editor with a background in biochemical science. Her work has been featured in Vogue magazine, The Poetry Review, and on BBC Radio 4. She won the 2017 Out-Spoken Page Poetry Prize and was third in the 2017 National Poetry Competition.

Her poems are included in the recently published Bloodaxe anthology, Ten: Poets of the New Generation, which is edited by Karen McCarthy Woolf. Writing about Momtaza in the anthology, the poet Pascale Petit said: “She writes poems that are of urgent concern for us all in these turbulent times, and specifcally address communities of the refugee diasporas. She draws from a broad spectrum of cultures and poetries from around the world, creating hybrids of high and low culture – which is particularly impressive from someone still in her early twenties.”

◄ From Martha’s Vineyard to Swansea with Anne-Marie Fyfe