'They remind us of our own hearts ... quivering in the lightest wind' 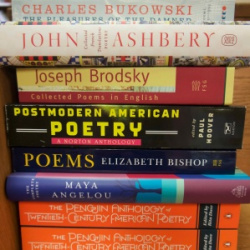 I've never seen a frigate bird (or a frigate) but wanted to offer you a poem to prove that the hawks and crows of the Great Plains aren't the only ones that get attention in this column. Sally Bliumis-Dunn's poem comes from her chapbook, Galapagos Poems, from Kattywompus Press. She lives in Armonk, New York, where there are frigates, but no frigate birds, or so I've heard.

Massive and black
the frigate birds,
on brambles in the distance.

Their bright red gular sacs,
full as spinnaker sails
billow from their feathers,

like giant hearts of skin and air.
They remind us of our own

hearts, oversized and awkward,
quivering in the lightest wind.


American Life in Poetry is made possible by the Poetry Foundation, publisher of Poetry magazine. It is also supported by the Department of English at the University of Nebraska, Lincoln. Poem copyright © 2016 by Sally Bliumis-Dunn, 'Startled', from Galapagos Poems, (Kattywompus Press, 2016). Poem reprinted by permission of Sally Bliumis-Dunn and the publisher. Introduction copyright © 2018 by the Poetry Foundation. The introduction’s author, Ted Kooser, served as United States Poet Laureate Consultant in Poetry to the Library of Congress from 2004-06.

Foyle Young Poets of the Year award is open for entries ►