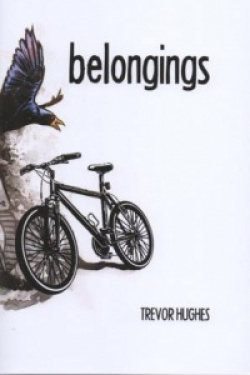 This is not an easy review to write. Not because the poems in Trevor Hughes’ debut collection, Belongings, are “hard”, in the sense of releasing their meaning with difficulty. Not even because of the very painful nature of what the poems convey. Rather, because the collection engages with a level of feeling that cannot easily be expressed in words. Yet it is precisely through language that Trevor Hughes has achieved this. My initial response was tears, particularly on reading ‘King’s Square’ which describes the cathartic moment when Trevor is able to “exude tears like Niobe//luxuriate in the flow/from deep within the core”. He has happened upon street singers performing “an operatic aria”. My second response was to share the collection with the many friends who leapt to mind as I read it.

How do these poems achieve this kind of emotional connection with the reader?  The book begins with a foreword that explains how they came about.  Partly it is the heritage of poetry in Liverpool, where Trevor Hughes grew up, and in Hull where he taught English. But primarily it is the life and death of his son Peter, who threw himself off the Humber Bridge in East Yorkshire, shortly after a diagnosis of schizophrenia.

As we begin reading these spare, carefully structured poems, we already know where we are headed. Words and phrases lose their simple meanings, their innocence, once we are aware of this – and the work is all the more powerful for that. For example, ‘birth’, which opens the collection, ends with “I will hold you first/embrace your lightness/bear your weight”. This kind of delicate prescience is threaded across the pages that follow. In ‘writing on the wall’, which describes Peter’s exam revision notes that “spiral out of control”, the last two lines are a recognition of “maybe a touch of genius/as the first cracks open”. In ‘entertainer’, Peter’s late night hammering on the piano disturbs a neighbour who instead of complaining, “pauses/sits on his stairs/lost in the moment”. And in ‘Linnet and Lark’, a poem addressed to Peter, we hear how “[you] extract a promise from me/to see your novel published//if you get too tired”.

Most of the poems are from the point of view of Trevor, Peter’s father, and poignantly address Peter directly. Yet despite this “external” perspective, they provide extraordinary insight into Peter’s private world of dangerous, malevolent voices. ‘spell’, for example, ambitiously records the unstoppable, repetitive commands of one tormentor: “godandthedevil/godandthedevil/follow me/you have no choice”, in 16 tight lines with no stanza breaks. In ‘imagine’, the image of “a fierce black bird” that “grips your shoulder/lunges at you in your cage” evokes the violent cruelty of Peter’s condition, its bodily cost – ending grimly with the line “this bird is here to stay”.

Twenty-three of these 31 poems are in pared-down tercets. This carefully structured form seems essential if the suffering shown through rich imagery and acutely observed detail is to be contained. Particularly effective is ‘cortège’ where grief’s capacity to shrink an entire world down to one or two trivial items is precisely evoked: “black gloves” guide Peter’s father to the hearse and “leather upholstery” shrouds him, “under the motor’s steady purr”. In the sun’s glare at the cemetery, all he glimpses are “suits and hats, the outlines of familiar faces”.

For all the pain and frustration experienced by father and son, these poems also celebrate Peter’s life. He was a gifted national chess champion and ‘chess’ shows us Peter “relaxed,/immersed in another world” and though his knee shakes and he disappears offstage between moves, in the final stanza “you leave the board/fist raised/glow in victory” – and the reader feels that triumph.  Similarly in ‘Sunday Lunch’, the first stanza is a portrait of Peter that acknowledges his suffering, yet also conveys a joyful exhilaration at briefly overcoming it, “the pangs of sweet relief”:

You burst in through the kitchen door,

a startled smile on your face,

your battered bike down troubled lanes.

Inevitably though, after the challenges of medication and hospitalisation, we come to the final hollow awfulness  – in the poem ‘endgame’. When Peter is not at home his father waits, knowing that “you have gone to the river”.

In these ways, then, the collection’s poems take the reader on a journey from Peter’s birth, through his troubled youth and into the illness that culminates in his death at 25, his father’s identification of his body, his funeral and the long grieving that follows. For me the collection works by leaving nothing out.  There is no aspect of that journey that is not unflinchingly explored in poems that are utterly unsentimental. They draw the reader in inexorably and so bring schizophrenia out into the light; as Graham Chesters says in his foreword, “undermining some of the stigma attached to mental illness”, and achieving “some kind of victory over the inner voices that mocked and tormented a kind, intelligent soul”.  I was reminded of Elaine Feinstein’s poem ‘Muse’ which tells us to “write something every day”, because poetry strengthens “our fierce and obstinate centres”.