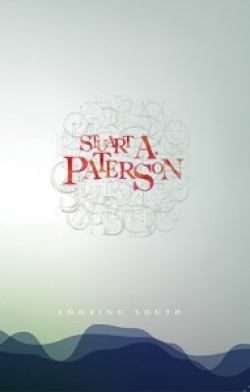 Stuart A Paterson writes in English and his native Scots, and lives by the Solway coast in Galloway. He is a past recipient of an Eric Gregory award, in 1992, and his pamphlet collection, Border Lines, won a Saboteur award in 2016. He is also BBC Scotland’s current poet in residence.

His profile on Write Out Loud records that Paterson moved to England from 1998-2012, before returning after a career in social care to live and write by the Solway Firth, that is part of the border that separates Scotland from England. The firth strtetches from St Bees Head in Cumbria, to the Mull of Galloway. on the western end of Dumfries and Galloway. The Isle of Man is not far away.

Paterson’s full collection, Looking South, includes poems about weather, geography, nationalism, and the sea, and has the Solway Firth at its heart in poems such as ‘Hidden Channel’, with its “false promises of dry land”, and its victims that have been swept away or “paddled into shallow eternity” (‘Staying On’).

An uncertainty about quicksands and tides extends to borders themselves and a sense of direction. In ‘Uphill’ Paterson is on a train travelling through Cumbria towards Carlisle: “I’m never quite sure when I am or where / at times like these …” Elsewhere he observes: “Everywhere is south of somewhere else / I tell myself, north is relative” (‘South’).  Talking about a small coastal village in southern Galloway, but also referring to the “the irony/ of a fast-receding England”, he says:

The road to Southerness was always rocky, but today

over an almost lost causeway.

(‘The road to Southerness’)

‘Dreich’, as Paterson’s notes to the poem explain, is “an emblematic Scots word pertaining to weather which is miserable, cold, damp, depressing, enervating. Therefore a word in constant & daily use by the Scottish people.” Yet in this poem Scottish place names are listed as in a triumphant song by the Proclaimers. Despite the weather there are “the bright blue / Yes signs on the Staffin road”, and memories of historic  crofters’ uprisings on Skye:

at last in more than hope & tattered

flags of fairtytale beliefs, the fraying

cairns of Braes & Glendale made anew

& on the march to somewhere free

of glorious defeat, of mists, of pasts.

Another poem is titled ’18-9-15’, when Scottish voters narrowly voted against independence. It talks of “plate-faced pensioners … prepared to vote away the inevitable”, with a companion, ’18-9-16’, on the opposite page that includes the line “no tide is resisted for long.”

But Paterson is too good-humoured, high-spirited and questioning to be dubbed a political tub-thumper. In ‘News’ he relates that “Today I thought I ought to write a poem / of how borders heave with refugees, / weave metaphors like plaited grass, / give voice to untranslated pleas”. He considers the option of “breaths / reserved for sympathy that does no good”, and rejects it: “The week is crammed with awful news. / At least, from here, there are stunning views.”

In ‘Swans on the Caul’ Paterson jokes about seeking “buzzing swarms of imagery”, but instead his mind turns to old-fashioned medical remedies for poets struggling for inspiration: “Swans on the Caul, is it? Here, take / two of these & three of each at night / washed down with half a leech.“

He is meticulous in mapping out his stamping ground, his sense of place,                               treacherous currents that claimed lives, homes and communities lost to land wrongs committed centuries ago. In one poem the poet sees himself as merging into the coastline: “These days I’m less & less to see. / The beach is wearing most of me.” (‘Coastal Erosion’).

A couple of poems celebrate a pub in Dumfries, the Tam O’ Shanter. And why not? This collection allows us to share Stuart Paterson’s joy in the place where he has washed up. In the final poem in the collection, the brief but euphoric ‘The Long Run’, he sees “a meek sea” that “laps sharp skerries, the world is bursting / with poetry and possibility.” It concludes:

Good morning, I love you, the road runs on

Looking South makes you want to seek out and explore the Solway area that Stuart Paterson charts. It is a pleasure to read these technically gifted poems, their craft unobtrusive, enjoy the landscapes that this poet sees – and consider a jaunt that might end at the Tam O’Shanter in Dumfries. It is one of the finest collections that I have come across in recent years.

◄ Collection of art and poetry on stillbirth to be launched