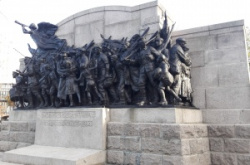 A national poetry competition has been launched by the Duke of Cambridge to mark the 100th anniversary of the end of the first world war. The Defence Medical Rehabilitation Centre, which will relocate from its current home at Headley Court in Surrey to Stanford Hall near Loughborough at a cost of £300m later this year, is seeking poetry that “honours those affected by service and pays tribute to humankind's capacity to cope with adversity”.

The best five entries in the A Poem to Remember competition will be chosen by a panel of judges, chaired by historian Dan Snow, and then go to a public vote, covered by national media. The winning entry will be read out by Prince William at a ceremony this summer. The poem will be displayed prominently in perpetuity at the new Defence Medical Rehabilitation Centre.

The competition is open to everyone aged 17 and over. The overall winner will receive a £2,000 cash prize, with four runners-up receiving £500. Poems must be no longer than 25 lines, and the deadline for entries is 9 April. More details

◄ I'm Having the Rhyme of My Life: George Melling, Talentvine Press

I'll them my poems about conscientious objectors. Do you think I have a chance?