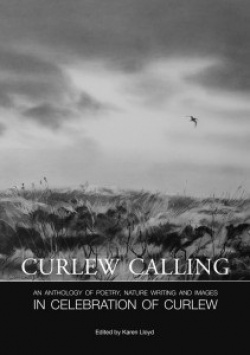 The cover of this anthology of poetry, nature writing and images “in celebration of curlew” shows a distant, indistinct bird in flight, an image that is sadly appropriate.

According to the RSPB, between 1995 and 2012, the breeding populations of this remarkable bird with its curved bill, long legs and resonant, mournful call, declined by 55% in Scotland, by 30% in England, and by around 80% in Wales and Northern Ireland over similar periods.

Loss of breeding grounds because of changes in farming practices is said to be among the reasons for the sharp decline. As John Fox’s anthology title poem ‘Curlew Calling’ puts it: “They are leaving us because / we gave them cash crop furrows / and a predation of foxes and EU crows.”

This anthology has been published to raise funds for curlew conservation. In her introduction editor Karen Lloyd, a poet based on the edge of the Lake District, who also writes for the Guardian’s Country Diary and Countryfile magazine, explains that the book came about after she became involved in a project monitoring curlew with artists on the Shropshire and Welsh borders.

It was brought to the attention of Write Out Loud readers last year when we published Karen’s call for submissions, and also when Jonathan Humble won our Poem of the Week with ‘Incoming’,  his typically humorous poem about a curlew on the attack in defence of her eggs, which is included in the anthology: “How are you / to know, my crescent beaked nemesis, that I am, / in fact, a fully paid up member of the RSPB and have / no designs on the eggs you’ve hidden.”

Don’t expect too many other laughs in this book. The anthology celebrates the curlew’s role as harbinger of spring, but also points to its increasing rarity. Martin Reed’s ‘Real’ mourns the loss of “real winters” and elm trees, as well as curlew. Lucy Grove’s ‘A Shropshire Curlew’ fears their disappearance from the area: “Grandad knew of dozens, / Father a few, / My son will not know you here”;  Kate Noakes looks into the future and finds them absent at the Laugharne of Dylan Thomas in 2042.

Donald S Murray’s poem ‘Guildneach’ – the Scots Gaelic word for curlew -  recalls a curlew calling time in the evenings when “our village football matches rolled on too long”, and concludes with this remarkable description of its cry:

from the lips of widows, those who’d lost a child,

its sob a sound beyond words,

the utterance of one who’d seen her world lost and defiled.

In one of the many absorbing prose sections of the anthology, naturalist and writer Mark Cocker points out in the foreword “the extent to which each biological deficit inflicted by species loss carries a cultural toll … We are burning down our landscapes and stripping out our imaginations.”

But the anthology ends on an uplifting note. Karen Izod observes a curlew at work, “archaeologist of this silt-scape”, at Blakeney, Norfolk. And In ‘Curlews at Raw Green Farm, 2017’, Harriet Fraser awaits, with increasing anxiety, their belated spring return:

Then I hear it. In the distance, a trickle of song in the sky.

I stop my breath, raised my eyes.

This time, no artifice: the call rises, fluid on the air.

I see it too, the soft ‘M’ of outstretched wings,

and I am lifted – sure, now, that spring is here.

This anthology contains poetry with a purpose, with a point to make. It helps to reinforce our bond with the landscape and its wildlife, and mourns its decline. But it is also trying to do something about it, to reverse something that appears to many to be inevitable. Let’s hear it for the curlew.

◄ 'They die on the rug. We find them there, eyes open in surprise'

Farewell, John Togher: Write Out Loud Wigan's organiser to step down after 10 years at the helm ►