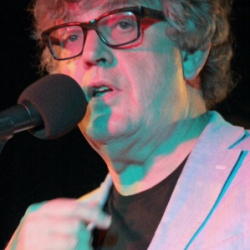 The Northern Irish poet Paul Muldoon, who was once described by the Times Literary Supplement as the most significant English-language poet born since the second world war, has been named this year’s winner of the Queen’s gold medal for poetry.

The poet Laureate, Carol Ann Duffy, said: “Paul Muldoon is widely acclaimed as the most original and influential poet of the past 50 years and is rightly celebrated alongside Seamus Heaney. His poetry displays a restless, playful brilliance, forever searching for new ways to channel his ideas and new language to dress them in.”

Muldoon was born in Portadown, Co Armagh,and published his first poetry collection in 1973. He has lived mainly in the US for the last 30 years, teaching at Princeton University and then editing poetry for the New Yorker magazine until earlier this year. He was also Oxford professor of poetry from 1999 to 2004.

Duffy said of Muldoon: “He is ambitious, erudite, witty and musical. He can experiment with form and stand tradition on its head, craft a tender elegy or intimate love poem with equal skill. His work is of major significance internationally – poetry of clarity, invention, purpose and importance which has raised the bar of what’s possible in poetry to new heights.”

Muldoon is the youngest of a group of poets from Northern Ireland, including Seamus Heaney and Michael Longley, that was centred around Queen’s University in Belfast, and who gained prominence in the 1970s. He delivered a tribute to Heaney at the Nobel prize winner’s funeral in Dublin in 2013. He now lives in New York City and Sharon Springs, New York.

Background: Poetry as a shooting script - Paul Muldoon at the Troubadour in 2014