Competition closes in 16 days, 22 hours. Get details and Enter. 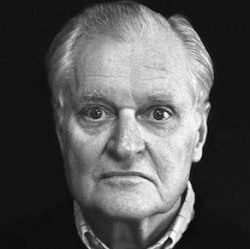 It’s been a hard couple of years for me. Many of my poetic signposts have died recently and sometimes it’s hard not to feel a little lost now. Lee Harwood, Tom Raworth, Roy Fisher – and now John Ashbery.

He was part of a remarkable generation of poets who gathered in New York, who knew each other and even partied together – Frank O’Hara, James Schuyler, Kenneth Koch and Barbara Guest were the others. Serious and funny, high-falutin’ and low cultured at the same time, they were a total contrast to the angsty poetry of Lowell and co, and I loved them for that. As the title of an Ashbery poem shows – ‘Daffy Duck In Hollywood’ – they were not averse to popular culture; but Ashbery could also write seriously about very high art – ‘Self-Portrait In A Convex Mirror’ is a meditation on a painting by Parmigiano.

My first readings of Ashbery were confusing, though. The way his longer poems especially weave round subjects, make diversions, shift registers and pronouns with seeming abandon makes him hard to read for those used to poetry that sticks to one subject and goes in a relatively linear manner to a neat conclusion. Which, let’s face it, is a lot of British poetry of the Larkin school and after. I had to learn to read him.

And I learned to read him by doing one simple thing: letting my mind go loose. Stop expecting to understand a poem on first reading, stop looking for a narrative that isn’t there, or an argument that leads to a conclusion. Ashbery’s poetry is less like an argument, or a description of an experience, and more an experience in itself. It’s like sitting in an armchair thinking about stuff. And maybe he has a subject in mind or maybe he didn’t, but he let the whole of life into his poetry, the serious and the funny, the minor and the major.

Here’s the beginning of ‘Grand Gallop’:

All things seem mention of themselves

And the names which stem from them branch out to other referents.

Hugely, spring exists again. The weigila does its dusty thing

In fire-hammered air. And garbage cans are heaved against

The railings as the tulips yawn and crack open and fall apart.

And today is Monday. Today’s lunch is: Spanish omelette, lettuce and tomato salad,

The name we stole don’t remove us:

We have moved on a little ahead of them,

And now it is time to wait again.

To me, it’s how the mind moves when it’s relaxed: starts off with a little philosophical musing, notices the spring and flowers and the garbage cans, thinks about lunch then back to philosophical musing. And when I finally realised that’s what he was doing, I could read him with great pleasure. I’d listen in to his mind moving, catch what I could of it and enjoy it for the sheer pleasure of language.

Now he’s gone, I realise how much I learned from him. How to let the mind relax into the poem, how to read a poem that seemed at first not to make sense (because it wasn’t going anywhere? Where is a poem supposed to go anyway?)

There is so much more I could say about him; but it will take time before I can truly reflect on his legacy. In my opinion, he was one of the greatest poets of the last century. I can’t believe he’s gone.

'My arms grown taut with the thought of that wind' ►

I'm glad you posted this Steven, I picked up "Your Name Here" a week or two ago, second hand just on Ashberry's name, your essay is a timely guide in. Looking forward to it now, an approach prepared.
Dom.