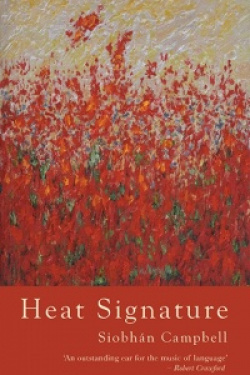 Prize-winning poet and critic Siobhán Campbell is an important voice in Irish poetry. Educated at University College, Dublin and at Lancaster University followed by postgraduate study at NYU and the New School, New York, she was associate professor in English literature and creative writing at Kingston University in London and now works for the Open University. Heat Signature is her sixth volume of poetry.

Heat Signature, which takes its title from thermal imaging technology, is fired with an infrared energy all of its own as Campbell writes of her absorbing interest in her homeland. In many ways the book is in keeping with her research interests, which focus on the place of the political poem in contemporary poetics. Taking her cue from Padraic Fiacc and Eavan Boland – two poets with whom she considers that she has a strong affinity – she writes poetry that seeks to engage with contemporary society through the guise of pastoral poetics, historical narrative and Irish mythology. Her poems pack a powerful punch, and are intelligent, complex and thought-provoking. ‘Warrenpoint’ and ‘The Origin of the Mimeo’ – a loaded reflection on the power of guns - are counterbalanced by ‘Concentration’ and ‘Chink’ that are written in a lighter tone and exhibit a wry sense of humour. She has a keen perception for language and knows how to use it for maximum effect.

The pastoral poems, such as ‘Weeding’, ‘Piebald’, ‘Fodder’, ‘Flora’, ‘About cows’ and ‘The longing of the bees’ are clever constructs which enable Campbell to address serious issues. For Campbell, the natural world is full of portents and musings. There is great energy in these poems, a feeling that some kind of conflict might break out at any moment. ‘Weeding’ explores and challenges the moral obligations of the world of work. ‘Piebald’ takes as its starting point the incongruity of the horse’s patchy colour and, because the horses referred to are often used by travellers, extends to an exploration of those who live on the edge of the urban sprawl. In ‘Fodder’ Campbell addresses the cornfield and the battles that were fought on its soil. The consequences of upsetting the proverbial applecart are neatly registered in ‘Flora’. The poem begins calmly enough:

The cow is on top of her game,

her haunches fat, her bones rounded.

However, in the last stanza, we are told:

But if she kicks the bucket at full froth,

tips it from the milker’s red-raw hand –

then she begins a hell which gathers heat

all through the livelong days without that milk.

This notion that anything could happen at any moment is a tension that is stitched with equal force in her poems about bees where we are told to gather together, to be ready and to brace ourselves for any kind of commotion.

‘Ravens’ is Campbell’s nod to Yeats. His ravens of unresting thought are influential in setting the tone of this volume. Tone is a word that Campbell is concerned about. Her attempt to discover the right tone is written about at length in a poem of the same name which occurs near the beginning of the collection. In this poem, she arrives at a definition of her own special brand of powerful writing:

Tone says here is the other cheek, why don’t you have a go at that?

Tone is when you’re giggling at a double bluff and you see someone crying.

Tone is an artist dropping a Ming vase and calling that art.

There is huge variety to be found here, not just in style but also in subject matter. It is a volume that is full of surprises and it is also one that is profoundly challenging and entertaining. The cover artwork by Frieda Hughes, entitled ‘Flaming Flowers’, gives off an energy all of its own and is a perfect match to this collection. Highly recommended.