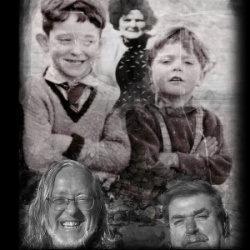 This poetry collection deals, among other things, with the author’s childhood in Ireland, the deaths of siblings and older relations and his fascination with words and reading. It contains numerous references to and quotations from famous writers of the past, from James Joyce to Emily Dickinson.

Sounds familiar, even commonplace? Forget it. These poems and this collection transcend all expectations of a volume of sensitive, sly, self-conscious backward looks. Instead this one sparkles with originality, vitality, and the love of life and language. As Dónall Dempsey writes in the poem ‘Sticking One’s Head Out of the Universe’:

the words haul it all

from that There to this Here.

so that he can

The past is where all our poems begin, and Dónall manages to sculpt chunks of his past into  exuberant and original creations that dance on his pages. The list of poem titles is itself fascinating, not a dull one in sight, including ‘His Wooden Leg Stares at Me’, ‘A Thin Slice Of Ham in the Hand is Better Than a Fat Pig in a Dream’, ‘Eat Your Alligator, Tilly!’ and ‘In Bed with Emily Dickinson’. The poet can describe the mundane in brilliant concrete terms, as in the poem ‘Much Ado About Something’:

in this my make-shift

The use of surreal language is convincing in its starkness, as in ‘The Always a Forever’:

The collection is peopled with memorable characters: the eponymous Gerry Sweeney’s mammy, “like having a spare mammy”; Uncle Michael, who looks like “he’s a dream/ made of summer”; Uncle Seanie “feet planted firmly in this field”;  and the dead sibling that haunts the collection:

could not contain my grief.

The world was as beautiful as

it could ever be.

But not for me.

His father is also fondly remembered:

magic of my father

gathering up the littlest

of my scattered dreams

& tiptoeing backwards     out of the room

Prose pieces are included here and there. Some act as notes or glosses to poems but others function more as standalone prose poems or even flash fiction. Some, one imagines, would be perfect as introductions to the poems when read in public. You can imagine the poems in this collection as great spoken word poems, but this is not to take away from their impact on the page. This is a substantial collection at over 130 pages and promises more joys and flashes of revelation with each reading.

Michael Farry is a poet and historian. He has had poetry published in magazines and anthologies in Ireland, the UK, Australia, Canada and the US, and has won awards in a number of poetry competitions. His first collection, Asking for Directions, was published by Doghouse Books, Tralee, in 2012.

Sign up for a poetry slam on the Isle of Man ►