No sweat, it's cool: verdict on new-look Poetry Cafe as pamphlets are launched 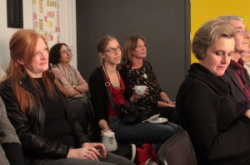 This is a picture of a happy audience in the new-look basement of the Poetry Café on Saturday night. There’s no doubt that the old downstairs at the Poetry Cafe in London had a ragamuffin identity – and aroma – all of its own. There were those who loved its sweaty ambience, although I was not one of them.

Maybe there will be some who lament that something has been lost amid the bright white surfaces of the new-look café, upstairs and downstairs – an expensive refit by the Poetry Society that has taken the best part of a year to complete. But an atmosphere is not just its surroundings, it is the feelings and inter-action generated by quality poetry and an appreciative audience.  And judging by the bonhomie engendered on Saturday night, the new-look café is already a hit. 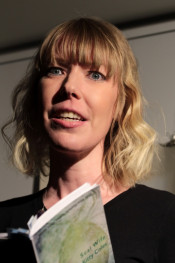 We were there for the joint launch of pamphlets by Rodney Wood and Kitty Coles, pictured - both regulars at Write Out Loud Woking. (Rodney is co-compere). Their readings were preceded by contributions by guest poets – Melanie Branton, Maggie Sawkins, Grant Tarbard, and myself.

Melanie was first up, her performance, as befits a slam champion, delivered without any reading aid, and laced with witty “syntax evasion” wordplay. There were also strong fairytale elements – of which, more later - including a poem about a gingerbread house, written from the witch’s viewpoint.

Award-winning poet Maggie Sawkins read several poems from her collection Zones of Avoidance, including one about a night when she interviewed her favourite band, another from the point of view of a stone, and ‘A Dog Asleep in the Crook of your Arm’ – the title says it all.

Second-half guest poet Grant Tarbard used to edit a well-loved print and remarkably illustrated online magazine The Screech Owl, both before and after he suffered a stroke that left him in a wheelchair. His poems on Saturday night included ‘Triptych’ – “I have had three deaths, / one for each decade” – and ‘Body’ (“I have been a life without a body / sitting slumped in silence and imcomplete”. They are included in his newly published Rosary of Ghosts, to be launched at the Poetry Cafe next month. The poems in it have been described by Martin Figura as “threaded through with pain; the gentle and abiding love in them carries us through”.

I felt obliged to include a poem about Waterloo station in my guest-poet set, given the struggles some poets and audience members had had to get to Covent Garden, thanks to the ongoing improvements at the London terminus that were meant to have been completed by the end of August, and are now continuing at weekends until the end of November …  but don’t get me started. 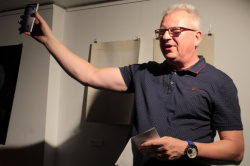 The final poet of the evening, Rodney Wood, pictured, was a revelation. As co-compere of Write Out Loud Woking, I reckon I know him fairly well, and am acquainted with the tercets he often writes involving repetition of lines and phrases – a style I believe he has initiated, and has dubbed his "little poetry machine". But the said tercets in his pocket-sized, limited-edition chapbook Dante Called You Beatrice took me aback, in their lyricism, heart-on-sleeve charm, and in the hypnotic quality of the repetition, which works both on the page, and even more so in performance.

Rodney is a poet that has been around for a while, and consequently seems to know almost everyone on the poetry scene. In his introduction he spoke of the generosity that he has found and valued in the poetry world – and he was certainly generous in his introductions to his fellow poets on Saturday night. It make me realise that what can be lacking at some launch nights is someone to introduce the launch poets themselves – and hopefully this review can partly make good that omission.

In that regard I must also pay tribute to the qualities of Kitty Coles, a younger poet whose name pops up very often in poetry magazines. She was launching her pamphlet collection Seal Wife, which was joint winner of last year’s Indigo Dreams poetry pamphlet competition. Her gothic, unsettling poems using stories and characters taken from fairtytales and myths create a particular world. Her style is cool and controlled, even if the subject matter is the darkness on the edge of town. They are poems that are outside the comfort zone; that is their point.

She disclaims any autobiographical element. Introducing one poem, ‘Black Annis’, with its references to “rag and bone”, and “gowns of skin”, Kitty said: “People can’t possibly think this poem’s about me.” She described another, ‘Peter the Wild Boy’ as “the only one that has a tenuous link with real life”. Other titles included ‘Poltergeist’, ‘Osisris’, ‘Banshee’ and ‘Forest’. We will be hearing more from her, and about her, and one day be saying: “Kitty Coles? She used to read at Write Out Loud Woking, you know.”

As we walked back past the anti-terrorism barriers on Waterloo bridge afterwards, I reflected again on the changes at the Poetry Café - smart new toilets, and extra space in the café upstairs, too. And Grant Tarbard’s verdict on the access facilities? “The only addition to what was already there (disabled toilet and a lift, which are fine) is a slightly awkward ramp. At least it's a small improvement - and it's the only poetry venue that I know of in London that's fully accessible.” From today (Monday 18 September) the Poetry Cafe is open from 11am, Monday to Friday, and on some Saturdays, too.

Milestones poetry competition anthology: order early to get a discount! ►