IN THE FATHER REDCAP 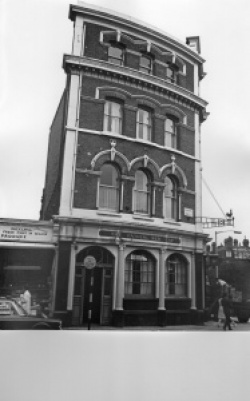 in the father redcap on camberwell green

a fight broke out

blood and beer all up the walls

all the fault of billy bloxsome

now the pub has changed its name

it's called the nollywood club (for nigerians)

fair do's.  I've never tried to knock one out

all those boozers have changed or gone

familiar faces on the streets an age away.

there's more fear out there than ever was

in the father redcap on camberwell green.

(and yes, billy was good to his mum).

Yes David. The training of entertainers before TV (as for musicians) always thrived in variety circuits - clubs pubs and theatres . You could say that the current crop of hopefuls has been more of less manufactured for a mass viewing market rather than people on the hoof. We are sadly restricted in our options now. Roy Castle was a victim and drove forward the anti smoking lobby, true enough. He was a devout Christian too but that didn't save him.

Thanks for your comments !

An interesting comment David revealing truths - churches and pubs finding common ground in experience! You're right that all life is there in the unexpected - with often a dose of nostalgia. I used to do gigs in east end pubs and you'd always get a tale or two - especially claiming they knew a "genius" on the piano who could play anything , bollox of course. I fear there was a sort of safety if you were a known face, but musos were often liked and respected. I wouldn't have missed those days. Sad that many are going, leaving a bleak dodgy vacuum perhaps.

Thanks Ferris for feeling uncomfortable and appreciating the mood of the poem!

Thanks Kevin; it's incredible how many pubs the Victorians built - with all the building it was thirsty work! I'm glad you got the flavour.

Thanks for the likes Leon and Colin too.

Since putting this poem on I have discovered a photo I took in 1966 of the pub in question before alterations. Please not the unloading of kegs from wooden crates of a contemporary lorry and the barrow. Plus the cockerel sign, which I think was Courage brewery. Thanks for viewing . I couldn't get rid of the blank border (edit pane in the way).

Hi Ray
Just googled the Father Redcap to get a better feel for the poem. It looked an impressive building, but I'm not sure how it would have worked with male strippers behind the bar.
Really enjoyed this one