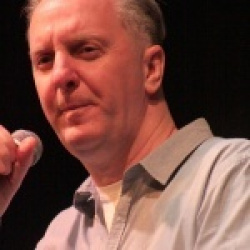 Tony Walsh, whose poem 'This is The Place' rallied the city of Manchester and won worldwide admiration in the aftermath of the Manchester Arena bomb attack in May, will be taking part in a special benefit concert - We Are Manchester - to mark the reopening of the venue on Saturday 9 September.

Tickets are sold out for the concert, which will also feature Noel Gallagher's High Flying Birds, and Rick Astley. All profits from the concert will raise money for the Manchester Memorial Fund, a charitable trust overseen by the Lord Mayor of Manchester which will go towards establishing a permanent memorial for the 22 May attack.

In a recent interview with the i newspaper Tony said he was still overwhelmed by the reation to his performance of the poem at a vigil in Manchester for the the 22 bomb victims, the day after the attack. “I’d struggle to tell you anything that has entered this city’s – or any city’s – culture more deeply and more quickly. People are having it tattooed. There is graffiti art in the street. A deaf choir performed it and sent it to me, which was lovely. People are knitting, embroidering, crocheting it. Somebody put it on a skateboard. It’s been painted on buildings. It’s 30 foot wide in the Arndale. There is even a note-perfect Hacienda mix dance single of it, Together (This Is The Place).”

Tony Walsh delivered his iconic poem  at a remembrance concert in June for the bomb victims, which featured Ariana Grande, who headed the original concert that ended in the terror atrocity.