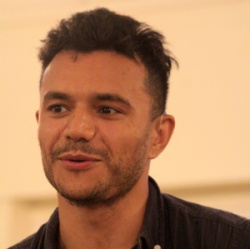 It began with a stiff climb early one morning in April to commemorate the centenary of the death of Edward Thomas, and ended in July with an evening of powerful and moving poetry, interspersed with classical guitar. In between the events at Steep and in nearby Petersfield there had been others held in bookshops, libraries, churches and local halls across the South Downs national park, including a weekend of poetry in Lewes, East Sussex.

The second year of the South Downs poetry festival concluded on Saturday night at St Petersfield parish hall in Petersfield with a beautiful duet reading by Jewish-American poets Wendy Klein and Norbert Hirschhorn, pictured below, followed by a set by Raymond Antrobus, pictured right, that received a standing ovation from a smallish but very appreciative audience.

Wendy Klein said she first met Norbert Hirschhorn at a poetry reading some time ago “when this gentleman came up and kissed my hand”. They read his touching poem ‘From Podwoloczyska to Ellis Island’, about a young couple heading for America, together at Petersfield.

Hirschhorn’s long poem ‘Confessions’ was laced with dark humour  - “we are God’s Chosen People. / I wonder what we were chosen for” – and concluded with a painful, poignant vision. The poet comes upon a couple in Sainsburys, “a shrunken old man, straggled beard – Jewish, surely – and his tiny wife, too much lipstick” and suddenly sees them “holding hands, walking along a cobbled street / too slow for the men in boots, guns, and thumbs / in their belts.” 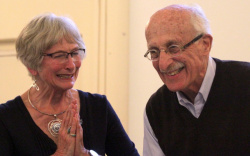 Wendy Klein read a poem about her grandfather, a man who fiercely disapproved of his daughter’s Gentile husbands, but who was also heavily involved in civil rights law. The poem described his “Negro” maid ascending in a lift intended for rich white people in New York. “I fought my editor to keep in the N-word – it is the word that people would have used,” she said.

They were followed by English poet Charlotte Innes, now resident in Los Angeles, and also with Jewish heritage. ‘An Old Story’ describes her coming upon a book that refers to the tragic separation of her grandfather and grandmother on a train to Switzerland – he arrested, she crawling across the border.

Raymond Antrobus is a British-Jamaican poet, born and bred in east London. He engages with the audience from the start, and talks about his deafness: “I was born deaf. Deafness comes with a whole culture. Two years ago I became a teacher of poetry for deaf young people.” His angry, lyrical poem about deafness is addressed to ‘Dear Hearing World’: “Deaf voices go missing like sound in space, and I have left Earth to find them.”

Another poem described the shooting dead by a US traffic cop of a deaf man who was unable to make himself understood. An “unfinished” pantoum – “the deaf son who slurs his speech … I like making dad laugh … I say my mistake again … He says Raymond, you’re something else” – received rapturous applause. It’s difficult to find something with fresh insight about dementia, but Antrobus succeeds brilliantly in his uplifting, optimistic poem ‘Goodnight Africa Man.’ 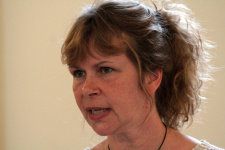 Earlier in the evening there were contributions from South Downs poetry competition winner Jane Lovell, pictured right, Jessica Mookherjee, and the editor of Agenda magazine, Patricia McCarthy. Agenda, which is based in East Sussex, was founded in 1959 by Ezra Pound and William Cookson, and every issue is as solid, substantial and satisfying as a book. Agenda, according to McCarthy in the current issue, "has always eschewed the ephemeral, fashionable poetry that is surely in vogue one day and out of vogue the next". Her own remarkably scathing review of Alice Oswald's latest collection would seem to reinforce her editorial line.

We also enjoyed the classical guitar skills of Dennis Cooke, that were as refreshing as a cooling drink in between some of the readings. I would recommend such musical interludes at more poetry events, and found his evocation of Spain especially moving, in that our daughter is due to give birth to our first grandchild in Andalusia in a month’s time.

When I arrived before the start of the evening readings Mandy Pannett, a member of the festival team, was delivering Philip Larkin’s ‘Church Going’ to a small group of poetry lovers outside the church – a wonderful way to get you in the mood. Congratulations to the small team led by festival director Tim Dawes that has come up with such a varied programme over the last few months.

I had other commitments but regret not attending more of the festival events, particularly the early-morning climb up Shoulder of Mutton Hill for a reading of Edward Thomas poems at the Poet’s Stone on 9 April. I will have to make my own pilgrimage, in my own time.

◄ 'Like newlyweds, my parents slip out of their clothes'

Plea to publishers to help place books in pubs ►