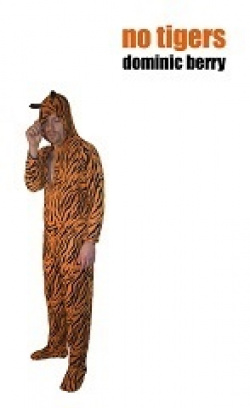 This is the fourth poetry collection by Manchester's premier Queer Vegan Poet, Dominic Berry. He gets about a bit does Dom, to put it mildly. With gigs and tours in such far-flung places as Germany, France, the Netherlands, the US, Canada, India, New Zealand and Australia, he was also recently voted best spoken word artist in Saboteur awards, and has just returned from a storming performance at Glastonbury festival, where he was the festival website’s poet in residence this year.

No Tigers is divided into four sections. I mused on this structural similarity to the human heart,  on how all four are essential to the continuation of life; on the processes of existence and survival.

On initial reading, the very first poem '19th Century Boy' left an uncomfortable crease behind, which I kept mentally flicking back to. As I made my way through the rest of the book, it became increasingly significant, until I reached a Eureka moment about two thirds of the way through the book.  '19th Century Boy' is the blueprint, the scene-setter, it is everything that is wrong with how we raise our children, how we shape our societies, how we are complicit in our own hegemonic manipulation. It is suitably written in a seemingly simplistic style, and significantly, the entire piece is in quote marks, making it one long quotation. From who, from where?

I like my work and do as I am told.

For every carpet colour, there's a dye.

The brilliant blue is shining, bright as gold.

Did you just read that again, knowing that something was wrong, but accepting what the printed word told you?

Dominic deals with conventions. The recognition of them, adherence to, and breaking of. He shows our alienation from reality, how we can't simply value the blue for itself; we can only value it through the filters of convention. He examines how convention appears to comfort people, yet blinds them to the real reality. With that in mind, we plunge straight into the section entitled 'Hard Working Families' immediately after '19th Century Boy'.

That hackneyed phrase so beloved of the rightwing press and Tory ideology is delicately ripped to shreds in the poem itself. Revealed as a tool of division, of how society can be so easily blinded and sidetracked by simplistic but powerful and effective devices, it shows the ridiculousness of placing your faith in it

You're someone who'll never need charity.

You'll never get spots or a rash

for you're in a hard-working family.

You'll never get cramp or chlamydia.

You are an icon of normality.

Your child can't have spina bifida

for you're in a hard-working family.

We're given impotent cultural talismans, and we hang onto them like grim death.

Dominic's poetry is physical, intimate, and brutally so at times.  In 'Men Locked Behind Toilet Doors', we're taken through several scenarios of masculine vulnerability, from

to Tom, approaching 14 years of age, with an unknown bully kicking the door and repeating "fucking queer I'm going to get you", to William, who is made to play "the fat guy in Mortal Kombat X"

down left right purge. William no longer chokes on chunks will often use his toothbrush

today it's only fingers…splat pattern porcelain.

and finally to Dan, with his "cocaine-caked nostrils", whose "atoms are sexy dancing high kicks" and who has found a way to escape being lonely. A way that involves using a chemical stimulant to induce dramatic physiological change

it is not on top of Tibetan mountains. Nirvana is here. Dan has never heard a remix

album by Bjork. Dan unlocks his toilet door. Steps outside and Dan. Can. Breathe.

So in this one specific environment, situation, circumstance, in this one place behind a locked toilet door lie multiple scenarios, all with a central core of fragile male vulnerability, and displaying given roles and power dynamics.  If you are on the other side of that locked door, will you be aware of them or question them? Or are they hidden so successfully that you're not and you won't?  If you were on the inside, how would you react?

Show me a man who knows

there is nothing wrong with eyes that cry.

A crying man is not breaking down.

A man who can block his tears is not fixed.

Show me a man who will hear my son's howls

they are the sound of his engine accelerating.

This internal combustion marks the start of a path

to all that his pain and love will generate.

I am teaching my child

it's not too much for a man

This poem breaks into and shatters the all-consuming interpellation of male children into the cultural role of the powerful masculine identity, of dominance via suppressed emotion. It is an absolute rejection of our society's valuing of men through the filter of convention, of what makes a “real man”.  As a feminist, I am all too aware of the damage inflicted on men, and therefore on women, by this process.  That terrifying statistic of two women per week on average killed by partners or former partners is concrete evidence that we are doing something horribly wrong to our male children.

There is plenty of humour too in this collection, with 'My Rude Elbow' being “so sexy it could detonate a church”, and one fleeting sight of it “gave your nan her first multiple orgasm”. At first sight, this is just plain funny. As with all of Dominic's poetry though, there is a deeper layer of meaning. This is a subversion of received notions of physical beauty and attraction.

We have yet more subversion of cultural mores in 'Playing Mortal Kombat Guarantees You Inner Calm'.  In laying out the many and diverse ways that existing within a capitalist society can crush a person's soul, Dominic also lays waste to the moral panic over violent “video games” as we used to call them

I'd have murdered half my school

and every boss I've ever had.

But Mortal Kombat soothed my wrath.

I felt my fury fade.

If life's been hard, left you scarred,

In this poem, we see resistance to a shock narrative, by the simple and real result experienced by the individual.  I'm reminded once again of my life's motto – Question Everything.

The poem 'No Tiger' itself deals with expectations arising from a materialistic attitude. A safari trip to see Indian tigers results in zero sightings with resultant disappointment. In the very next poem 'Tiger', the famed creatures appear, sparking a flurry of cameraphone activity

I sit and watch the tiger turn away.

We grabbed our prizes. Snaps to feed our greed.

We paid our time. We were not killed today.

We leave with more than any of us need.

There's a sick sense of satiety, self-disgust at an opportunity wasted in the capitalistic scramble. An opportunity to see a majestic and uncontrollable creature that is not subject to hegemonic manipulation, and we think it can be bought.

There are some achingly poignant poems in this collection that centre around the healing of a broken heart; forays into the nature of unconditional love, as well as the base neediness of the torn and damaged, and some eloquent verse on the hypocrisy of carnivorial attitudes to diet, and the ongoing illegality of homosexuality in India. A calm acceptance of oneself is reached, via a long journey of harsh lessons and epiphanies, of the kindness of strangers, and the recognition of the real harm done by the social process of interpellation.

The closing poem's title made me smile when I read it – '21st Century Boy' - a clever bookending with the opener. It talks of an “app” you can download for your smartphone, where “everything nasty: filtered”

A homeless woman being kicked in the head?

There is no rape no racism no litter for you to see.

Material things are prized. Happiness is still not real. Analysis of anything is unwelcome, and control of yourself/world/life is an illusion:

Objectively prove you are safe and secured.

We need to understand how to survive, how to live beyond merely existing; how the heart appears at first sight to be one whole unit, but operates on multiple levels, and how all four of them are essential, though hidden, and finally, how there is no hierarchy within the human heart.

This is a robust, intelligent, and uncompromising collection, liberally dusted with humour and pathos, deeply poetic yet containing obvious stage pieces, proving once more that the Flapjack Press ethos of successful synergy between performance and page really does work. The searing honesty which is the mark of every true poet shines out of every line. I'm going to read this again. And again. And most probably again. I thoroughly recommend that you do too, and try to catch Dominic at one of his gigs.

Then Come Back: Pablo Neruda, Bloodaxe ►