What would Alice have said? Conger on menu as poets cram in for anthology launch 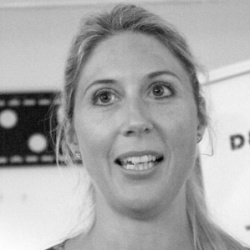 There was a definite air of Lewis Carroll at the launch of a poetry anthology in Guildford on Monday night. The author of Alice has links with the Surrey town – he wrote Alice Through the Looking Glass in the house he bought for his six unmarried sisters, and died there, too.

As poets, friends and family kept appearing at the door of a pub’s compact upstairs room for the launch of Poems to Keep, you kind of expected the Mad Hatter and March Hare to appear and shout: “No room! No room!”

On several occasions there really didn’t appear to be any more room – but cheery compere Dónall  Dempsey welcomed everyone in nevertheless, and miraculously, if not magically, everyone did more or less find a seat. There was even space for three dogs, who listened attentively to the poetry.

Poems to Keep is the latest anthology published by Janice and Dónall Dempsey, or Dempsey and Windle before they became husband and wife. It is a mixture of competition winners and shortlisted poets, and guest poets, many of whom have headlined at the regular monthly poetry nights that Janice and Dónall have hosted in Guildford over the years.

The winner of the Brian Dempsey memorial prize – named after Dónall’s younger brother who died of a heart attack aged 52 a year ago – was Alexandra Davis, pictured above. Her poem ‘The Stag’ recounts her husband’s excited description: “He lifted his arms in revelation, the size! / The size of his antlers! The span! The height! / The throat on him! He was praising the moment, / too big for the kitchen”.  Alexandra’s prize is publication of a pamphlet collection, plus a £50 cash prize. She lives in Suffolk with her husband and four children and teaches English.

Janice and Dónall say on their website: “This year we selected the winning and commended poems ourselves. We compiled the initial selection of a list of about 100 poems from the 300 or so that were submitted with relative ease, but selecting the shortlist that we wanted to publish in the book was much more difficult, because the average standard of submissions this year was so high.” On Monday night Dónall explained how the entries arrived: “The early runners all seemed to be from Yorkshire. Then near the deadline everyone panicked and we were overwhelmed.”

It was a wild, exuberant and wacky evening, the atmosphere maintained by Dónall’s compering, his thunderous delivery making no concessions to the intimate nature of the venue, upstairs at The Keep pub, where no mic is needed, and where downstairs a history lecture was in progress in the main bar. 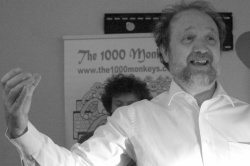 John Wheeler, pictured left, gave us a barnstorming, Shakespearean ‘Solioquy Two’, from the competition section of the anthology, which told of a nasty accident that could happen to any chap: “Oh then what woe escaped my startled lips!” It had the women in the audience in stitches, and the men wondering about any stitches that might have been needed.

Richard Hawtree, a regular at The 1000 Monkeys poetry nights in Guildford, was another crowdpleaser, from the guest poets section, with his poem ‘April Leaps’: “It doesn’t matter if you call this spring, / Easter, Lent or vernal equinox: / April’s fling will happen anyway / with you or someone else”.  He performed it with relish and joy. (The poem first appeared as a poster on Limerick’s 'April is Poetry Month’ poetry trail in 2016.) 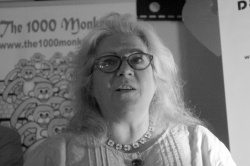 Poetry competitor Wendy Falla, pictured right, entertained and disgusted her audience in equal measure with a tale of Channel Islands cuisine, ‘The Conger Confessional’ – “skin as tough as old leather, / which, when pierced with the point of a knife / oozes fleshy juices the colour and consistency / of wallpaper paste.”

Another guest poet, Ted Hughes award winner Maggie Sawkins, paid tribute to her pet and to the other two dogs present with ‘A Dog Asleep in the Crook of your Arm’: “Who wouldn’t crave an end like this …/ no call to resist / just two sleepers in a tryst.” That one is not in the anthology, but she also read two others that are, ‘Hooked’ and ‘The Drowned’, also from her Zones of Avoidance collection. 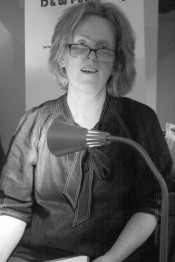 And Lewis Carroll reappeared, with ‘Why is a Raven Like a Writing Desk?’, poetry competitor Catherine Eunson, pictured left, examining the riddle apparently without an answer that was first posed by the Mad Hatter.

Many of the poets had travelled long distances to cram in at The Keep. One poet in the anthology who couldn’t make it was Colonel Shyam Sundar Sharma, Shaurya Chakra (retired), “a decorated and war-wounded veteran, birdwatcher, and nature-lover”, who “runs a vibrant poetry group in New Delhi”.  Dónall read out his anthology poem, ‘Mid-Way Course Correction’, at the start of the evening. There are also works by poets from France, Switzerland, Spain, the US, Singapore, and Bulgaria in the anthology, as well as poems by regulars at Guildford poetry nights and at Write Out Loud Woking, including Karen Izod, Ray Pool, Geoffrey and Lorri Pimlott, and Andy BJ Low.

Other guest poets in the anthology are Timothy Adès, Chrys Salt, Ghareeb Iskander, Bernard Kops, Steve Pottinger, Dónall Dempsey, Lisa Kelly and Dan Kennedy. A second edition of Poems to Keep is on the way, ironing out one or two glitches, and you can obtain a copy here.

A wonderful follow up account almost as enjoyable as the evening itself Greg. Some fantastic poetry in convivial surroundings.