This was the place to be: primary pupils inspired by Manchester poem perform with panache 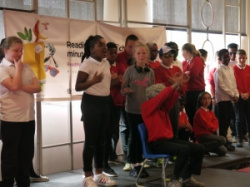 I am watching outstanding performances of some of our nation’s favourite children’s poems, by youngsters whose families have been here for generations, and their more recently arrived fellow pupils who between them have over 30 first languages: Mancunian (of course) to Magyar, Albanian to Arabic, Roma to Russian, Shona to Swedish. Children who can smile in more languages than most of us have even heard of; children whose faces represent all corners of our world; some who’ve made perilous journeys to get to the UK, picking up other languages en route – Italian, French, Flemish, German – here, in Lily Lane, Moston, Manchester, performing Albert and the Lion with their best Lancashire accents, several Michael Rosen poems and, most moving of all, class 6C performing Tony Walsh’s This is The Place that he read at the vigil for the Manchester bombing victims, and which has become a worldwide phenomenon.

“It was spontaneous, really,” the school’s literacy coordinator Jane Cunningham told me. ”After the bombing we decided to use Tony’s poem as a basis for looking at Manchester’s history, its industries, its music, all the elements of his poem to learn more about the city that all these children now call home, and they loved it.”

And we, their audience, loved them, literacy consultant Dawn Robertson and I acting as a sort of guest panel giving “expert” feedback to the pupils’ renditions. In spite of my 14 years of encouraging the sharing of poetry between individuals, mostly adults, I was staggered by the skill and passion of these young children in what for many of them is a second or third language. Anyone who has seen top poetry slammers or experienced performance poets knows that, in general, those who learn their lines off by heart make the best impression. Not one of these children faltered, with most projecting and enunciating like professionals. And the eldest is just 11.

Such performances do not happen spontaneously. They must have rehearsed until their fingers bled, as they were as good as anything you can see at top open-mic events. This should have been on our gig guide for others to witness. And all just a couple of miles up the A62 from the terrible events of 22nd May. As they used to say in Lancashire, happen good can come of woe. If so, this is the place: Lily Lane primary school, whose headteacher Julia Clark has been inspired by her attendances at open-mic poetry events such as Write out Loud Marsden, where she is a regular reader, and a member of its Marsden, the Poetry Village initiative.

I felt profoundly moved by the whole experience. The sheer joy those children radiated was a vindication, not just of the power of sharing poetry aloud, but of the school’s genius in using poetry performance to help all of the children make equal and equally valid contributions, in a shared, meaningful and downright fun way - contributing perhaps to what Jigme Singye Wangchuck called gross national happiness.

You can see video footage of some performances here:

'Boys who knew when you were posing, waiting for someone to say, "smile" ' ►