I must be living twice: Eileen Myles, Serpent's Tail 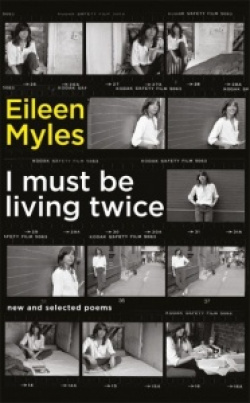 Eileen Myles is a compelling reader of her own works, and looks on the cover of this hardback selected and new poems as if she’s channelling Patti Smith. The studied air of cool pervades this whole collection, and at times it makes for wonderful poetry that speaks of a New York as vibrant and open as we always imagined it to be.

Myles’ technique is to take the ephemeral and quotidian details of her life and out of them build to a kind of sublime insight, and sometimes this works brilliantly, as in her signature poem, ‘An American Poem’, which makes the claim that she’s a Kennedy and pretends that she’s from Boston and says:

Shouldn’t we all be Kennedys?

is home of the business-

man and home of the

beautiful teeth who are not

on the street. What shall

we do about this dilemma?

That’s from the middle of a poem that starts with a fantasy of being part of a rich family and goes on to make subtle political points about the state of America. But it also illustrates one of the problems with quoting short extracts in reviews from her. A lot of her poems snake down the page and are full of twist and turns, at once autobiographical, silly, loving, rude sometimes (there are some poems about sex), funny, wise, all mixed up together in an almost collaged way. So much so, that it’s easy to miss the insights, to think this is all very trivial, and not at all sublime.

I’m sometimes reminded of Robert Creeley, when she uses her short-lined phrases in isolated verses as in ‘My Wife Is Shopping’:

Again, this extract is inadequate, seemingly unpoetic, but the poem builds up to something strangely beautiful and affecting about an ordinary situation in a supermarket, something observed and felt as life is going along.

I don’t always want to read poetry like this; sometimes I want more seemingly serious and deep poetry about Important Subjects (but what is an important subject?) but sometimes I want a poetry that celebrates the life of ordinary objects, ordinary people like the kid in school leaning against the wall trying to look, or the mess and beauty we make of relationships - even in one short poem, which I’ll quote in full, an ordinary bunch of tulips:

Then a group of you

found singing in a park

around a stupid old historical statue

Some tulips are completely

red, and some are terribly yellow.

Then the others shaded by both

maybe less clearly this or that.

But the mixed tulips

I love for their compassion.

They soften the blows

I find them very beautiful.

Which perhaps says as much as I have attempted to say in this review; I love these poems for their compassion, for their thisness  and thatness, and find them very beautiful.