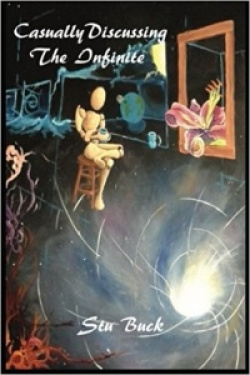 'Casually Discussing The Infinite' is the long-awaited debut collection by Write Out Loud regular Stu Buck.  American publisher Snow Leopard has a healthy list of previously published writers, each seemingly as eclectic and individual as Stu himself, so he's in good company.

Knowing his fondness for Bukowski, I feel at a bit of a disadvantage.  I've never been a fan of the man's work, so there's a chance I may be missing certain obvious influences. Having said that, I am aware that Stu produces some of the most alarmingly original writing that I've ever read, so perhaps I am doing him a disservice by even considering that line of thought.

The book has the feel of a graphic novel about it, with illustrations preceding the poems. Whilst I appreciate the visual art, and there's no doubt that it does enhance the collection, my focus is on the poetry itself, which grips the reader from the off.  'the jackdaws' launches the collection with immediate and shocking imagery of a common happening - bird versus window pane - but with added emotional response, to nudge it from mundanity to horror

…clattered into the pane

a scream trapped tight behind the teeth of a child.

Reading Stu's work has always been a visceral experience. It's akin to being quietly drawn and quartered, whilst laughing with delight at the incision and precision, bone-cold in its honesty and intensity. With imagery powerful enough to spark synapses and fling any reader back to “that” time, I defy you not to be drawn in and brutalised.

It's not all poetic sucker punches though. There's a dark humour lacing the pages, turning up when you least expect it, as well as the acute ability to place oneself back into childhood, using both the structure of the piece and linguistic simplicity.  I confess I laughed like a drain at the final few lines of 'Gecko'

… I didn't think anyone

would ever get a real lizard for their birthday so

when he handed it to me I thought it was plastic

pink thud that told me it was time to go home.

Beware of the possibility of lumps in the throat on occasion. An especially large and uncontainable one may appear during the reading of 'maps', thanks to that ability to return to a time of innocence, only to have it snatched away and perverted by the murk and mire of the so-called grown-up world.

Returning to the notion of influence, there is one that I spotted very early on in Stu's work, thanks to a shared obsession with the band Neutral Milk Hotel.  'my brother and I' is reminiscent of both a track on the album 'In The Aeroplane Over The Sea' and the first poem I ever read by Stu. In fact, this feels like a heavily-edited version of that poem.

release from the jar

Awareness of this influence does not in any way detract from the enjoyment of the piece, and I have a quiet hope that the mention of it will lead readers to listen to the album.

This collection is dotted with experimental structures which encourage the re-reading of certain pieces, sometimes many times over, in order to capture every possible nuance.  One piece combines the text of Psalm 45 with an email advert, for instance.  I'm very fond of writing that makes you think, that doesn't spoonfeed the reader or insult their intelligence. Give me poetry with an after-taste every time.

Sensuality also weaves its way through the poems, employing all five senses in 'les bulot'.  From a foodie's perspective, this poem is an absolute delight to read, tinged with regret though it is.

Brevity is a speciality of Stu's, illuminated brilliantly by 'dog'.  In eight short lines, it shunts us from the aforementioned naive innocence slap-bang into a shocking and brutal scenario, followed up by two extraordinarily potent closing lines, which will have you ruminating long after you've finished the book. Nothing is ever quite as it seems.  See also the three lines of 'blusher', which puts one in mind of the concision employed in “For sale: baby shoes, never worn”, often attributed to Hemingway.

Great poetry makes you think differently about things, about the world.  'river' takes us from the seemingly mundane into a kaleidoscopic whirl , forcing new perspectives with great humour and eye-widening imagery

expecting to hear the devil

but instead causing time and matter to condense and

thus causing considerable change within myself and

every musical note returned to its instrument

and every human being turned into a glint in no one's

Complete with a nose-thumbing at Richard Dawkins, this is one of my favourite poems in the collection; it ticks so many boxes for me.

Most collections of poetry will include at least one love poem. This is no exception. What is exceptional, however, is that these love poems incorporate science, physics; there's some dissociation in there, stepping far beyond mawkish sentimentality into clean-cut analysis, whilst managing to still acknowledge the core, the strength, the very essence of love.  This is an unusual ability for a contemporary writer, although it does put one in mind of the Romantic poets, and their preoccupation with the emerging sciences.

In the eponymous closing poem, we are drawn through a tangle of tactile reverberations.  The 'writer, poet, and damn fine cook' Stu Buck reaches through and invites us to join him in celebration of this wondrous, chaotic and unpredictable miracle called life

we are all brittle and spotless and so infinite

staring through the generations of madness

to find a reason for this seeming insignificance

I finished this collection feeling bruised by words that had grabbed me, slapped me, punched and kicked me, held me close and tenderly, made me laugh and showed me worlds beyond my own perceptions.  'Casually' dances like no one is watching, using colour, movement, and temporal shifts, its music still resonating long after the final page is turned.

You too can gain access to the psychedelic mind of one Stuart Buck, for just under ten of your English pounds, which really is an insignificant amount to pay for poems of such great significance.

From books to magazines: new poetry fair in London on Saturday ►

Congratulations Stu on getting published! This will be on my "to buy" list. At the moment I have over fifteen books that I have bought but haven't read yet!

Anyway, best of luck with it!

Laura, nice review! Hope you are well too..

Thank you Colin - it was a pleasure to read and review Stu's book.

excellent review Laura and good luck with the book Stu.