No time for lunch at festival's three-hour banquet of poetry 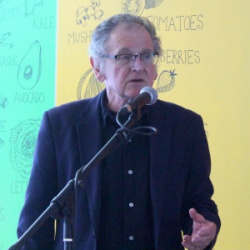 More than two dozen poets played their part in a three-hour poetry session at a literary festival in a Surrey commuter town at the weekend. The Poetry Lunch, organised by Write Out Loud Woking, comprised four guest poets and more than 20 open mic readers, all performing in the café of the Lightbox art gallery from 12-3pm. The afternoon was capped by a former local councillor – now an international poetry performer, Racker Donnelly, pictured  – returning to the town to deliver a comprehensive, informative, and hilarious history of Woking in verse.

This account is aimed at being detached and without bias. But that is not really possible, because I organised – or curated, if you prefer the posher word – the Lightbox festival’s poetry event. In this case it meant securing the services of guest poets Geoff Allnutt, Alison Hill, Maggie Sawkins, and Racker Donnelly, and drawing up a list of 16 open micers to read over three hours.

And, boy, did we fill the allotted time, and then some. I was never very good at maths, and in my eagerness to provide decent slots for the guest poets, and cram in as many open micers as wanted to read, I had neglected to provide for any breaks. Over three hours, that’s quite an omission, which slowly dawned on me during the afternoon. To be fair, my co-compere at Write Out Loud Woking, Rodney Wood, had pointed this out to me in advance, but by then it was already too late. The slots were all filled. 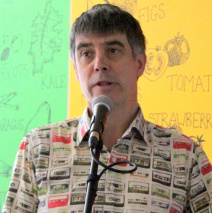 On the other hand, the vibe was really good, even if I say so myself. Performance poet Geoff Allnutt, pictured left, kicked off the event with some lively and amusing music-related poems, even though he thought it best to err on the side of caution in deciding not to read the title poem from his collection The Twat in the Flat so early in the day.

Alison Hill read from her collection Sisters in Spitfires, about the women who ferried planes to airfields across the country during the second world war, striking a chord with those aware of nearby Brooklands and its aviation history. Maggie Sawkins came up from Portsmouth to read her Zones of Avoidance sequence, which won the Ted Hughes award for new work, about a daughter’s drug addiction – a poignant reading that had many of the audience hanging on her words. 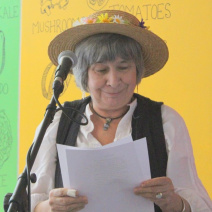 Sandwiched in between – well, it was a Poetry Lunch - were three batches of open micers, drawn largely but not entirely from those poets who frequent Write Out Loud Woking, and the longer-running The 1,000 Monkeys in Guildford, whose hosts, Janice and Donall Dempsey, came along, too. A splendid array and variety of talent, with Lorri Pimlott, pictued right, taking the plaudits for the best hat, and Graham Brown, pictured below, left, travelling from the Isle of Wight to deliver his jokey, pun-laced verses – and to bale me out when I accidentally deleted all my photos the following day. 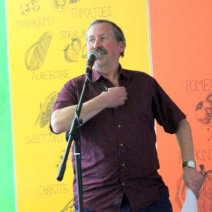 Then came Racker, an Irish poet with an international profile, and a strong Woking connection. As Peter Donnelly, he led the Labour group on Woking council 25 years ago, and wrote and staged two plays set in Woking: A Woman's Wartime and Wokka-Doodle-Dandy, which includes The Wokkiad, a comic history of Woking.

You didn’t think Woking was an important place? Think again. Racker treated us to an extended and fascinating history lesson, laced with outrageous rhymes, such as “Emperor Maximilian” and “thanks a million”, to help illustrate the Treaty of Woking signed also by Henry VII that signalled lasting peace between England and Austria. There were also references to the Diggers at nearby Weybridge in 1649, and the confiscation of common land at Sutton Green. He even tried to whip up crowd trouble between adherents of Woking and Guildford, in which I enthusiastically joined, until I recalled how many of our fellow poets hailed from that other place, and saw that they were looking momentarily affronted. It was a fine climax to the Poetry Lunch – except that we still had more poets to fit in, and so embarked on an additional, overspill session for those that had waited patiently for their turn for more than three hours. Pauline Watson, from Mole Valley Poets, and Phil Whittick, hats off to you.

We also managed to squeeze in two young poets who turned up on the day. Grace Sullivan-Royall was so enthusiastic afterwards that she promised to come along to the next Write Out Loud Woking open mic night at the New Inn, and wrote this on our Facebook page:  “I just wanted to say a massive thank you to everyone at the Lightbox today, it was my first time speaking my poetry out loud, and I honestly had the most amazing time. Everyone was so welcoming and supportive, I felt at home. Not only have I discovered some poets that I just have to hear more of but I've met a wonderful community of people as passionate about poetry and the power of words as I am.” Heartwarming stuff, Grace. 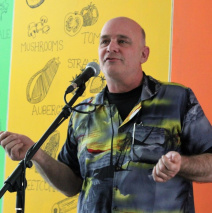 All that remains to be said is another big thank-you, to the Lightbox for inviting us to be part of their first literary festival. Woking is no cultural desert: a new local music and arts venue is being launched, and the town boasts two theatres, and a thriving am-dram scene. The Lightbox itself is celebrating its 10th anniversary this year with a prestigious Henry Moore exhibition, and also regularly puts on displays of paintings and sculpture from the private collection of modern British and contemporary art of entrepreneur and philanthropist Chris Ingram. It also stages comedy and film nights.

But perhaps this weekend’s literary festival, which included talks from local authors, and events on Shakespeare and Jane Austen, as well as our poetry, signalled that the gallery will be reaching out more to the wider arts in future, as well as showing off fine art. More poetry lunches in the Lightbox’s excellent Seasons café? Let’s hope so.

sorry you didn't have time for your own lunch Greg - and/but a great occasion much enjoyed by my guest who is new to spoken word events, and myself. Thank you for organising, a treat of a Saturday lunchtime.

You're right about the cafe being a really good space for poetry, Ray, aided by the Lightbox's good sound equipment. Glad you managed to get fed and watered, and that Mrs P had a good time. To be fair, I think the cafe did good business, despite the lack of breaks.

I would like to add to this excellent review that although there were no official breaks, the airy and spacious room did not feel in any way constricting, and I think that made for a sense of ease and involvement; plus the fact that there was a complete lack of formality which is always pleasant . My wife in particular is not partial to extended periods of concentration though she found the whole afternoon a revelation. Success! Incidentally, the food and drink were really good Greg. (I was one who munched and lunched on the premises).