Poetry in the round: how Pitt, Pottinger and Purshouse plotted show at the pub 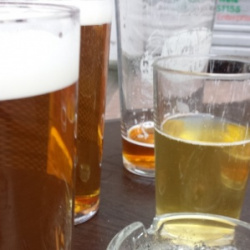 Wolverhampton poets Dave Pitt, Steve Pottinger, and Emma Purshouse have joined forces to create a new show - Poets, Prattlers, and Pandemonialists - which will show at the Arena theatre in their home town on 21 April. Write Out Loud caught up with them and asked them about the preparation for the show …

How did you start working together?

Steve: I met Emma at one gig, and Dave at another, and the three of us got on. At some point, we decided to go to the pub for a quick pint. We started talking poetry and sharing ideas, and we still haven’t stopped.

What's the show about?

Dave: It’s about three poets meeting in a pub to discuss doing a show together. Who are these people? Do the poems complement or contradict each other? What is behind the poems? Is anything learnt?

Emma: Yeah, I think it's about the conversations that people genuinely have with each other when they sit down to have a drink. It's about exploring each other's points of view. It's also about the power of poetry to discuss things that sometimes are not so easily said. And it's about us three as performers having fun, and hoping that hits a note with the audience. There are a range of poems in the piece: laugh out loud stuff (hopefully), lyrical pieces, political and topical work.

Steve: It’s about engaging the audience from the first word to the last minute, and inspiring them to recognise the poetry in their own lives.

What will an audience notice that makes your show different from your standard poetry gig?

Dave: From the outset we didn’t want it to feel like poets doing a “set”, a show which was just an opener, middle and headliner. The poems had to bounce off each other like a bullet ricocheting around a cave. It needed to feel like you were watching a trio as opposed to three individual poets. And it needed to feel like you were just observing these people while sitting across from them in the pub. And that you’d stay and buy an extra couple of rounds to see what happens.

Emma: The way that we work together naturally involves ad-libbing, firing off each other and commenting or reacting to what the others have delivered. There are also times when we deliver lines from each other's poems when it feels natural. I think the conversational element between poems is very different in this show. I've not seen anything done like that before.

Steve: If just one person comes along because their mates have dragged them there, and leaves thinking “Wow! Poetry!” I’ll be happy.

Dave: When I nearly died eating some flapjack they seemed mildly concerned so I suppose that’s a good sign ... I hadn’t expected us to get through so many scratch cards. In five years’ time it’s possible my only memory of the rehearsal process will be scratching off silver coatings with a coin and hiding my disappointment when I haven’t won £250,000. So I suppose what it’s like working with these two is “good enough to counteract the disappointment of a losing scratchcard”.

Emma: It's fantastic working with other poets. I love collaborations. I particularly love it when I fire off people. There is a spark between us that just seems to work, so it was a no- brainer to join forces when Steve originally asked if I'd like to put on some sort of show.  The other two are also very hardworking, and it feels like we are all committed to the show at the same kind of level. We egg each other on to push things further. I think to be honest they've given me the confidence to write some new material that I might not otherwise have written. And Dave's right, when he choked on that flapjack in rehearsals I would have  definitely attempted the Heimlich manoeuvre if he'd gone a darker shade of blue. I note Steve stayed in his chair, but I think that was probably the shock.

Steve: When we ran the poetry slam on this year’s Wolverhampton literary festival earlier this year, working with Emma and Dave felt effortless. Fun. I think – and I don’t know how this happens – that we bring the best out of each other.

Are there plans to take PPP anywhere else? Or is this a one-off?

Emma: I hope it's not a one-off. I love working with these two, even though they are complete idiots. And I've got a passport now, so if they want to take it further afield I'm up for it. I'd say we'd be happy to go anywhere that'll have us. They might need to set up some kind of sub-titling system if we take the Black Country accent abroad. Although, I guess future plans may depend on how the audience react on 21 April and if we can keep Pitt away from the flapjacks.

Steve: If there’s one thing we’re not short of, it’s plans. Watch this space!

Tickets for Poets, Prattlers, and Pandemonialists are on sale here