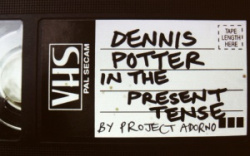 Who are Project Adorno? They are a quirky duo employing spoken word and song, electronic music backing, and occasional acoustic guitar, m’lud. The latest show compiled by spoken word maestro Russell Thompson and Praveen Manghani is Dennis Potter in the Present Tense, a tribute to the controversial TV screenwriter, and a follow-up to their show about another alternative national treasure, Derek Jarman.

Adorno performed their 45-minute collage of film, interviews, including the words of Potter himself, electronic music, and what I would generally describe as spoken songs to an appreciative audience at Kingston library on Thursday night.

Dennis Potter died from cancer in 1994. He stood as a Labour candidate at the 1964 general election; soon afterwards his health was affected by the onset of psoriatic arthropathy. He is best known for his BBC TV serials Pennies from Heaven, The Singing Detective, and television plays such as Blue Remembered Hills and Brimstone and Treacle, which was eventually shown as a film starring Sting. Other facts about Potter? One of his implacable opponents was clean-up TV campaigner Mary Whitehouse. He also named the cancer that killed him “Rupert”, after media mogul Rupert Murdoch.

Project Adorno’s show takes in Potter’s childhood home in the Forest of Dean, with film shot in that area and at other places with Potter associations, such as Hammersmith bridge, a football match at Fulham in the early 50s, the playwright’s love of the 30s crooner Al Bowlly, who was killed in the Blitz, as well as his most famous TV series and one-off plays. Both Pennies From Heaven and The Singing Detective featured Bowlly’s songs; The Singing Detective also dwelt on Potter’s debilitating skin condition, which often required hospital treatment.

The show also features interviews with Potter’s daughter Jane, and his producer Kenith Trodd, as well as quotes from Potter himself. Jane talks of how her father was focused on the here and now, as the grown-up children in Blue Remembered Hills experience a day in its fullness, as if it was a whole year. Adorno have taken the title of their show from quotes from Potter himself, such as “We tend to forget that life can only be defined in the present tense” and “The fact is, if you see the present tense, boy do you see it! And boy can you celebrate it.”

Referring to his final interview, Praveen sings of the playwright reminiscing about “the old days” at the BBC, “morphine and champagne chasers, just Melvyn Bragg and me”.  Another number about a drug that came close to curing Potter’s psoriasis talks of him being tired of tucking his trousers into his socks, “in case I leave my trails of glory.”

‘Potted Potter’, which the Adornos say is also a tribute to Lou Reed and John Cale, talks of writing a “another play today”, commissioned by the BBC: “They want to ban it, it’s nauseating, Alasdair Milne [BBC head at the time] is telling me …”  ‘Blackeyes’ explores his most controversial work, the novel/screenplay of which Adorno sing: “Angel or whore, you can never be sure, about Blackeyes.” Potter was accused of being misogynistic; or was he just writing about misogyny?  Another show segment reflects on the many fans, the Potterheads, with their Dennis Potter ashtrays: “I can quote from all the plays.”

Project Adorno supply the audience with a detailed breakdown of the 17 show segments, so that we understand what’s going on throughout. The duo’s understated approach is cerebral rather than in your face; they rarely make eye contact with the audience, for instance. I regretted that the backing music did not reflect more of the lush melodies that Potter loved, the poetry of popular music with which he laced many of his plays; and that the archive interviews were not always entirely audible above the music.

But the performance is stimulating and thought-provoking, just as the plays were. Living life in the present tense means names like Potter’s are in danger of being forgotten, consigned to the past, already. Project Adorno’s show, including the playwright’s prescient warning: “People won’t know what’s real and what’s not”, is a welcome antidote to that.