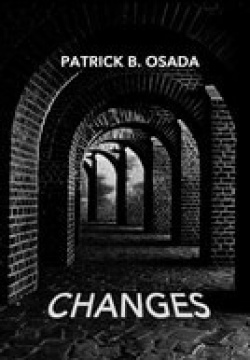 Patrick Osada’s fifth collection is divided into three sections, titled Seasonal, At a Time of Unrest, and Keepsake. The first section celebrates nature with traditional rhyme and rhythm, which feels both right and refreshing. Poems like ‘April’ display a keen observation worthy of the master, John Clare: “Dandelions glow like tiny suns / below the apple blossom’s first pink frills / …  in the hedgerows, ransoms start to show.” ‘Elvers’ conveys the springtime excitement of “this mass of squirming grey translucency”, Osada noting that baby eels, formerly “starving families’ grub”, are now sold as “Easter treats, to gastronomes”.

The natural order of things includes death. In ‘Still Life With Feathers’ the poet discovers a baby bluetit left behind in the nesting box:

Perched on a bed of moss and fur

With face inclined towards the hole

And watched his siblings take to flight

He may feel less tender towards a maggoty pheasant found behind his car grill (‘Remains’) but there is also an undercurrent of something else “as memories played in my head: / A lambent eye, a wisp of mist, / The darkness on the road ahead.“ Osada’s enthusiasm for nature can run away with him at times, with words like “wonderful” and “lovely” occasionally popping up, overlooked intruders in an otherwise-manicured lawn. ‘A Change in the Weather’ comes with an unexpected twist at the end: “We lie and wait for ragged dawn - / Together, but with separate thoughts / Aware, our love, like summer’s gone.”

The second section, ‘At a Time of Unrest’, is a looser collection of poems that is perhaps bound together by reflections on aspects of modern life. ‘About the House’ notes that the former stately home of Nancy Astor, Cliveden, beside the Thames, now attracts “weekend hordes”, when it previously hosted the likes of those who arrived by helicopter or limo. There is no direct mention of the 60s antics of John Profumo, the Russian naval attache, and Christine Keeler there; only “a shadow on the terrace” and “a sudden gust of wind” to suggest those ghosts. You can book a Profumo Affair Break there now, according to the website. Other poems in this section fondly recall Dansette record players, the darning of clothes to make them last, or are amused by tattoos, and people apparently talking to themselves in the street. Smuggled in among these are the more disturbing ‘Secret’, about a haunted childhood, and ‘Truce’, in which the poet searches “in vain for love’s green shoots”.

The final section ‘Keepsake’ covers familiar ground for those of a certain age; discovering new aspects of a parent’s life when clearing their effects, the changes evident in successive visits to care homes. But these are poems that it is still necessary for those involved to write; and Osada has brought freshness to this well-trodden territory. ‘Private History’ finds “photos we’d not seen … a world and places we’ve not been … a family we’ll not know”. It goes on:

And, from the war, escaping through thick snow.

No pictures mark your trip across the sea

But next, in England, working on a plane.

Lots of your squadron – “fighters for the free” –

There are more of his father’s memories of Poland in ‘Beneath Limes’. Osada also finds himself  reflecting on a poignant change of roles in ‘The Reading Test’ when his mother, a former headteacher, is examined by an ex-pupil. ‘Easter Moon’ provides the arresting image of a “moon-breast rising on an x-ray screen / With a shadow – a cloud, like an eclipse.” ‘Visiting’ addresses his mother in her care home:  “Teaching was your life and all those children / still come to you for lessons … every one, /in cupboards, behind curtains, they are waiting / for visitors to leave this empty room.”

Another poem, ‘Inheritance’, concludes: “You would know we’d clear your house / And buried secrets we’d dig out.” A sense of discoveries as well as things that still need explaining runs as a hidden theme through this collection. Changes is the title that Patrick Osada has chosen for this book – but for me, an alternative could have been Secrets. It is a book that richly deserves re-reading, much more than a second glance.

'He was a calm man, a useful attribute for sending young men to their deaths' ►