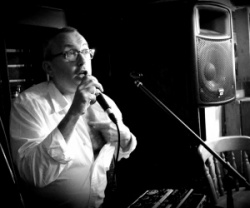 Wakefield’s Jimmy Andrex, who performs his poetry to the sound of a driving electonica beat, has a new album out. In an interview, he talks to Greg Freeman about Northern Beat Poetry, avoiding “obviousness or triteness” in political poems, celebrating local identity while avoiding “cartoon Yorkshireman” stereotypes, and why he is inspired both by WH Auden and the Sleaford Mods.

You have a new album out, available only on digital at the moment, but soon on CD as well. Can you tell us some more about it? What kind of material is on it?

It’s a collection of poems to music which I tout as Brexit Britain in Beats and Broken English.  The musical style is minimalist electronica. The poetry style, well …

How did you come up with the Northern Beat Poetry sound? How does it work? What do you think it adds to your poetry performance?

As an ex-guitar-toting muso I’m sick of guitars and dull indie landfill. I can’t even pick up my guitar any more, just don’t see the point. So I use little pocket operators, kaossilators and loopers.  They’re cheap, sound massive and I don’t really know how they work, so what comes out has an element of chance about it, which means it’s less likely to be formulaic. On a guitar, you end up playing just like everything else that’s gone before. With electronica, there are different possibilities.

Your poem ‘Full English’ is aimed at the English Defence League. I greatly admired a poem I heard you do at Haworth last summer called ‘Foreigners’, which had the wonderful refrain, “What’s so great about us, and not them?” Do you find the need to write political poetry inescapable?

Jason Williamson of Sleaford Mods is always on about this: We have no choice but to respond to it in some way though there’s a built-in danger of obviousness or triteness, so I try to avoid “oo refugees, in’t it terrible?” because people either already believe it or, if they don’t, they’re not going to change their views just because you do rhyming couplets comparing ethnicity to ice-cream. I think the challenge is to throw everything we’ve got at it in terms of form, as well as content, then you might not change the world but at least you’re not just indulging yourself or pandering to what you think might win a slam.

Have you always lived in the Wakefield area? Does where you live affect the kind of stuff you write? I’m thinking of poems like ‘Normanton is Made of Dying Stars’, for instance.

I’ve always tried to celebrate our identity. I don’t get anything out of poems written by blokes in, say, Leeds, talking about people on some imagined American highway. I love this area and find it endlessly fascinating and frustrating in equal measure. What I hate is when people do the stereotyped flat-cap “ee-by-gum-aren’t-we-blunt” cartoon Yorkshireman.  It takes all sorts but just because I’m West Riding born and bred doesn’t mean I have to conform to such a stunted, simplistic stereotype. Auden didn’t, nor does Ian McMillan, so why should anybody else?

The poetry scene around Wakefield seems vibrant to an outsider. How do you see it? Are you still involved in the Red Shed Readings, which you co-founded with John Irving Clarke?

Red Shed Readings still goes on, independent, unfunded and proud. It’s great that there are other events now. There were none when we started. At the moment, the nice thing is that the different things that are on cater for different audiences and styles. We don’t care either way. We didn’t do this to be part of a “scene”. We’re from Wakefield. We’re like that.

Who are your poetic influences?

The Thirties poets are my current fave: Auden, MacNeice, Spender, Empson, et al, but Sylvia Plath has always been a big influence for me. Sleaford Mods are important too, though it’s a bit frustrating when you’ve been doing poetry with music for 10 years or more to have people say “oh, you’re just like Sleaford Mods,” ha ha. They’re great, though, and the challenge they give me is now I have to avoid sounding like them, because that would defeat the object of the exercise.  The best thing I read recently was Max Porter’s Grief Is The Thing With Feathers, which did new things with poetic form that make you want to go back and start again. Genius.

◄ 'The cranes, the grass, they tell us: this can go on for millions of years'