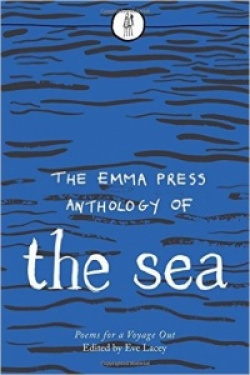 I landed belatedly on this collection and I’m kicking myself for not exploring it earlier. As a non-swimmer with a sensible wariness of water, I do enjoy the sea – from a distance. Some of these well-chosen poems plunge you right in and under the water and are gripping but somewhat scary. Others skirt the edges of the sea or bob about on its surface, leaving me feeling slightly safer if a bit queasy. But what a collection it is.

Editor Eve Lacey has divided them into waves of words – Ashore, Adrift, Awash and Avast - interspersed with gorgeous watery washes of illustration by Emma Press founder Emma Wright. There is a huge range of writers included from all walks of life, from different countries, from coast dwellers to the landlocked.

As Lacey points out, the language of the sea is all of its own. There are words here I had come across before but of which I had only a vague understanding. I needed a dictionary a couple of times. But I was transported by each and every poem, and some simply enveloped me in wetness and mystery. Claire Booker’s ‘Above the Waters – Arran’ is as fine a piece of descriptive writing as you’ll find in 16 lines:

in the fish-gutted strait hundreds skip

a ring o’ roses round the coves

then plough from view

behind the headland’s granite levitation.

Katherine Gallagher’s ‘The Lifeboat Shed’, inspired by the RNLI base at Aldeburgh, conjures up the calm before the storm as visitors think about the oldest organised lifesavers, that we take for granted. Diana Whitney’s ‘Outer Heron’ paints such a cold, grey, salty picture of the Atlantic that I could taste it, even though she is writing about Maine which I haven’t visited. ‘Missing’ by Rebecca Goss fed my deepest fears:

When they didn’t return

I fussed at my table,

of man and grandson

Two of my favourites feature whales and bearing in mind the beaching of these glorious creatures in New Zealand and elsewhere in the past few years I found them profoundly moving. ‘52 Hertz’ by Ellie Danak:

What you hear is an echo of my song

It comes from the deepest cave, my chest.

Eight beats a minute, this cry

swims through skin, it crosses gulfs

searching for love. My elephant

Sophie S Wright’s ‘Whalesong’ is a rhythmic, throbbing soundscape punctuated with “I I I” and dotted with hyphenations. Glorious. ‘Death of a Dandy-Prat’ (Angela Kirby) and ‘Bury Your Dead’ by Amy McAuley made me shiver while ‘Salt Drought Mound, by Julie Maclean, written about Lake Eyre in central Australia, is better than a painting:

A giant eel heaves itself from the core

of this artesian heart

Folds of skin are moist to the touch

from the seep of feeling springs

while roots of salt bush suck the last drop

and the illusion of ice spreads

Brian Grant’s ‘Now all of us are closer to the sea’ closes the collection with a warning of what is coming if we don’t change our global behaviour.

… a rot of ice defrosting in the breach –

comes crawling up on us – recalls us to the deep –

as the tide in tiny increments extends a graven reach

and all of us are closer to the beach –

Astonishingly, this is his first published poem. A wondrous collection. Judy Gordon

The Emma Press anthology of the sea, edited by Eve Lacey, Emma Press, £10 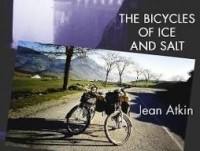