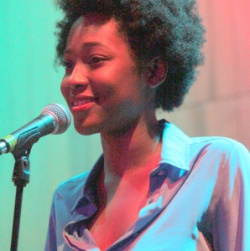 Theresa Lola is the new Hammer and Tongue national slam champion after triumphing in the two-day final at the Royal Albert Hall on Sunday night. Theresa, a London-based, Nigerian British poet, was Hackney’s slam champion representative in the final. Immediately after her win she tweeted: “Thank you all so much! I am still in shock.” Theresa, pictured at the Outspoken prize night in Camden in 2015, is a member of the Octavia women of colour collective, and you can read a couple of her poems here. Guest poets at the national slam finals were Rob Auton, Solomon OB, Dizraeli, Salena Godden, and Kat Francois.