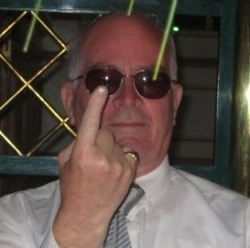 The first thing we had to clear was the one

he prized the most: the cluttered pinewood bar

he’d salvaged from a neighbour moving on

at the end of the nineteen seventies.

Embalmed in a gloopy coat of varnish

that set to a brittle sheen, it lacked retro chic,

scuffed down to the wood along its edges,

its surface crazed with memories.

In the days when family came to stay

it placed him centre stage, measuring out

or each medicinal dose of whiskey.

And yet, for all its high-stool bonhomie,

we dumped it, an eyesore for the viewers –

that even now in his posthumous life

makes him offers he can’t refuse.

Behind it was a glory hole that clanked

to the music of jumbled glasses

and the unopened bottles of quare stuff

brought back from their hols by others –

when his own preference was Jameson’s,

for me in a conspiratorial hush.

Yes, a tender tribute.
(We lived just up the road from Jameson's original Midleton Brewery 2002/2003 and every morning the smell of the mash put a smile on my face.)
Saw a lot of echoes of my own Irish father in this poem...

Wonderfully well written and evocative David, I enjoyed reading this very much. Paul