Black Again for the First Time

by J. Otis Powell‽ (with interrobang) 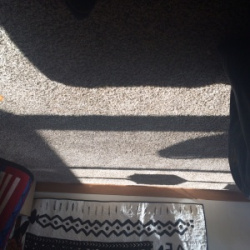 “The end of all our exploring will be to arrive where we started and know the place for the first time.” TS Elliot

Sometimes when we’re together I don’t feel like a family of one. One of us starts a phrase for momentum, and the other will pick up pitch, tone and rhythm to meet somewhere in a chord. Themes in our rotation lead us to rendezvous’, sometimes in the house of Riely other times in houses without walls: houses not made by hands, dwellings without foundations, ceilings. The particulars in our narrative surrender to essential touchstones that burn with kinship.

I love Negritude too much; I have to keep my loud secret respectfully and honestly. There are infinite worlds out here and none of us can hold even one in our hands, we try to control reality and it slips between our fingers when we flex to grip. When I met again with what I believe to be an incarnation carrying my spiritual origins, I thought: if this black wombyn was a church I’d attend regularly, if she was a religion I would join. We are family I acknowledge, a family of one, inseparable from the organism around us, our ancestors gave up their ghost so we might recognize our relationship to each other.

I'm black again, to where l never been, I'm black again to where I’ve always tried to be. I'm black again and I never knew my way home until now. Home is where the harvest is, where the lion lays down with the lamb. I didn’t plot my way black. I found my way black one wrong turn, one misspelled, mispronounced, misunderstood word at a time. I needed to get it wrong, sing it wrong, to hear, like bat radar, a new direction to fly. Oh yeah, I had to learn to fly to find my way black; like Brazilian slaves seeking freedom.

An ebony heart, mind and soul are not attained through osmosis because our world is so whitewashed with submissive imperatives that our original essence finds it hard to breathe. Our moral compass gives wrong directions, and advise is often dubious. Since light seldom leads to the end of a tunnel I’ve learned to navigate darkness in search of myself. Eventually darkness started to take form and show me mirror images I never knew were there. The absurdity of finding images reflected black from mirrors able to show essence in the dark is part of the difficulty of my journey black home.

I knew I was home when I heard her voice. I heard her before I saw her, using echolocation to identify where she was. Her “um boom ba boom” is what my ears had longed for, a sound stolen from consciousness centuries before. Her voice sounds like I want to sound; organic and free range. By reputation she might have been Madonna; mothering and protective or like Medusa, with hair grown into tangled snakes, tentacles, vines and rocket launchers to protect herself (and her young) from beauty standards that ostracize and make images of her monstrous from a patriarchal, white supremacist gaze. It’s impossible to consider her “Madonna” without adding the adjective “Black” because the politics of history require such particularity.

She’s a self-described “wombyn,” no single name or title however is large enough to contain all the things she embodies. One day she walked through a sliding glass door wearing huge bubble thick brown reamed cola bottle bottom eyeglasses and a sheer black speckled veil. Strangers in the lobby of my apartment building commented on the beauty of what she wore, because they couldn’t bring themselves to acknowledge that it was her eminence that left them ah struck. It was then I became a narrator of a story about her, because I’d never witnessed anybody as luminous as she appeared that day. She appeared so black-shinny-bright her name might have been Kassandra, from Greek nomenclature, she leaves a stain on whatever she touches some call her Phthalo Blue.

She was sorry to be late but she came from “way cross-town and traffic, is always heavy anymore.” I chuckled and started running water into a kettle; I know good and well she had come from much further away than that. I didn’t venture to speculate how much further but I’ve seem moon dust between her toes on hot Summer days when not even conditioning the air made it cooperate.

There’s something exotic about a wombyn who carries loose red berry organic tea and little strainers in her tote bag. Her complexion is blackberry; her hair is lamb’s wool that prefers to reach out and up rather than lie down and behave, so she manages it with elastic bands, scarfs, braids, hats or shark-toothed combs. She enters a space as if it and everybody in it awaits her arrival and we exhale together because she has finally come. Where she got her majesty only God knows. Before she leaves someone will have caught some of her majesty and wonder what the hell to do with it once she’s gone.

I invited Her Eminence to be my voice coach, hoping something of Her Majesty was contagious. That day she wore a black veil we were both in mourning and in different stages of bereavement for a man named after the Sun, who had been snatched away in the blink of an eye. A kind of poet-preacher-griot carrying seeds from several gardeners was struck suddenly in a fatal car accident spreading his seeds onto an interstate highway like he had spread his words and influence in South Minneapolis, Europe, across the Mississippi into Saint Paul and in secret places known only to him and the people he found there. This Brother Sun was a channel for poetry, moon drops and light and he threw them against hard surfaces knowing their potency would find a way through whatever deterred truth.

I anticipated her need to honor the passing of our beloved community member so I wore a black scarf with silver streaks around my neck. I had cued up a New Orleans style Dixieland version of Just a Closer Walk With Thee performed by a dectet lead by Wynton Marsalis with members of the Lincoln Center Jazz Orchestra, featuring Eric Clapton and Taj Mahal. They started playing a dirge and swung all the way through a coda to jubilation and a Second Line. While the precise composer of Just a Closer Walk With Thee is unknown, circumstantial evidence suggests it dates back to southern African-American churches of the 19th Century. The first known recording was by the Selah Jubilee Singers in October 1941. Of course it was made famous by musicians playing it at funerals in the Big Easy in the 20th and 21st Centuries as well.

Somewhere in there the whistle on the kettle blew and red berry tea was made after steeping through the rest of Just a Closer Walk... We both told personal stories that brought the spirit of Bro Sun into my apartment and we moaned and cried together like family. She, to my amazement sang a song in Creole, which interpreted means, “When Will You Visit Me Again?” While she sang a river ran down, not just from her eyes, her entire face wept. Afterwards we sang together; it started out wrong and went awry from there with wordless sounds remembering spirituals stolen black from slave owner’s hymnbooks and made our own again like, Nearer my God to Thee pinned by Sarah Adams, an English poet and Unitarian, and Thomas Dorsey’s Precious Lord Take my Hand.

It’s surprising how much old songs mean when we’re no longer entrapped by the context we first heard them, when we can see them from a distance. Before they were religious later they became cultural. The hardest thing to do is without, and I fight every day to hold on to everything and bring it with me. I wanted to be written about and decided the way to go about it was to do it myself. I wanted to write about the two of us; characters in a 21st Century saga about life, art and new narratives. I needed to tell a story about a match made in Minneapolis. Just as religious songs lose their pious stain so too dose sweetness from syrupy love verses fade into another realm of aesthetic appreciation. Ironically, I found blackness embodied in a blackberry, soul-filled, majestic wombyn; standing as a mannequin in the lobby of a performance titled: U/G/L/Y.

Duende was an umbilical cord neither of us wanted to cut, so screaming was how we expressed separation anxiety and the pain of losing connections to outer worlds, other worlds. We are attracted to the smell of placenta dug up from sky and made into aura, spread on like okra slime. I can’t resist sounds she makes because they wonder around inside me, searching for something to cling to. I’ve gotten too old to die young so I wonder how significant I am and make myself useful when ghosts need a hand. Love for ancestors is sometimes my strongest motivation to work and stay.

Duende addresses matters of metaphysics and spiritual challenging of ancestor requests and guidance. Without which I lose my way and squander responsibility for the privileges I enjoy on Earth. Duende in art and in particular music lifts narrative from personal to a larger relevance. My life, my work is witnessing realities richer than experience. Duende affords me openness to spiritual influences that make truth possible. How do we continue a conversation among the world, between fact and fiction, truth up against mendacity, Imagination confronting knowledge and ourselves? My orectic soul bends toward infinity with boundless ambition between layers of inherited attitudes and ancient expectations. I meditate on impossibility, on escape, on dreaming of flight. My omphalos is free though the creature between my wings is too pulled by gravity to fly.

Yet again I leap; into the darkness that is this wombyn, a stranger of sorts whom I hardly know, searching for me. It is from a wombyn I emerged, it will be to a womb that I return, in search of life and darkness again. I could see her in my morning cup of coffee if it weren’t for so much light reflecting off the surface. I feel her in warm egg yokes that burst in my mouth.