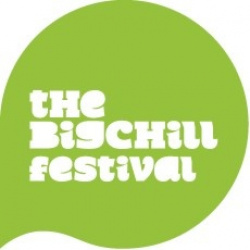 The Big Chill started as the Big Deluge, catching us out as we tried to erect our tents in the dark on Thursday night. How I laughed when I realised I’d brought the wrong tent. And the blow up bed that wasn’t self inflating. Luckily TW has more tent sense than me and saved my face much as he did at Latitude a couple of years ago. Seasoned festival promenader that he is, he elected to reconnoitre and negotiate the unlit glutinous paths in search of fellow poets. Me, I just crawled into my pit, adopted my ascetic, lying on hard ground is good for the back, posture and listened to the rain.

The next three days were glorious; the mud baked hard by Sunday and Eastnor Castle and Deer Park proved a fine setting for the drinking of ale and ritual scoffing of the classic traditional olde English dishes of kedgeree, paella and fajitas. What the deer make of it I don’t know. Mind you if they know where those magic mushrooms are they could have been out there in the woods expressing themselves unselfconsciously like so many others. Not being of the chemical generation a lot of the sub surface culture was lost on me but it’s always cheering to see people dancing wildly rather than wistfully sitting round the edge of a dance floor, even at 11.00 am.

Our visit was courtesy of Apples and Snakes who were running the Words in Motion tent, so naturally there were lots of familiar faces and chummy bonhomie. Most performers took the booming bass driven sound track in their stride although although a seasoned pro like John Hegley, seemed somewhat put off by its insistence.

Poetry high spots included Dreadlock Alien’s fifteen year old Birmingham protégé whose name I wrote down and lost. A product of DA’s school-based workshops he performed with confidence and style, easily not cheesily. The poetry programme was a bit of a stop start affair which meant the audience tend to drift away between each session and had to be dragged in and warmed up at the start of the next. Having said that if anyone short of a yogi had sat on that wooden floor for more than two hours I have no doubt their legs would have withered and fallen off.

Apart from the joy of seeing John Cooper Clark’s manuscripts blowing away leaving him to produce a foreshortened but utterly entertaining largely poetry-lite conversation with several hundred forgiving fans on the Castle Stage, and shaking hands with the venerable Brian Patten, the other highlight was Tongue Fu, a consortium of fine broken jazz players who brought superbly enjoyable  performances out of a number of  lyricists including the awfully naughty Salena Godden (she’d even give Mia Darlone a run for her money), Manchester’s very own (as we say in Clubland) Ben Mellor, and Kate Tempest who is the Janis Joplin of rap. This was truly an occasion when the words meant fuck-all but the voices soared and swooped to make you want to dance. Dance. Dancing to poetry. Whatever next Vicar?

Tongue Fu also backed Last Mango in Paris supporting their recently penned performance piece, “The Girl Who Learned to Beatbox from Her Ass”. This featured Bellatrix, Tongue Fu’s elegant and unassuming double bassist who just happens to be the world beat box champion. Now to me “TGWLTBFHA” is an extended rhyming joke that goes on for rather too long. I’m sure the average 11 year old would delight in its scatological references but to me it was just too much of a conceit (in the theatrical sense luvvie). It didn’t showcase much of Ms B’s beatboxing talent and at no time did she employ her derriere as an instrument. I imagine Rick Mayall and Ade Edmondson would have drooled over it but Le Petomane she is not.  Catching her own showcase performance in another venue later the true extent of her legitimate talent was revealed.

Perhaps the other notable feature was the Apples and Snakes’ commissioned extended four hander written and performed by Charlie Jordan, Emma McGordon, Rukus and Byron Vincent. This treatise on place and identity had an unlikely focus on West Bromwich Albion but was no worse for that. There were, as we say, cameo performances all round. I expect to see Byron Vincent doing stand up at some point. He has an engaging line in self-deprecation, good audience rapport, and killer timing, but that’s not to denigrate the contribution of the others. The work had been crafted from a number of disparate pieces and directed professionally by a very charming and easy going French man whose name I didn’t write down. Perhaps we would all benefit from some professional direction. I wonder how many Connexions Advisers direct the young aesthete into a career as a poet.

MVO Tony Walsh set the standard for audience involvement and put in his usual professional shift alongside stalwarts such as Aiofe Mannix, Jean “Binta” Breeeze, MVO Frisko, Jo Bell and Molly Naylor. There were many others but I had to take a number of comfort breaks. Brian Patten was there representing the “old school”. I could listen to him all day long. Having said that I probably lie. What I mean is that he always leaves me wanting more, much as his old publicly lamented mate, Adrian Mitchell, did.

And what of the music I hear you cry? There was a lot of it and it was very loud. Some I recognised. Reggae for instance, live from Dennis Bovell and Max Romeo. There was also a lot of comedy. I’m one of the few people who prefers stand up in three minute extracts on the TV.

Possibly the most entertaining spectacle of the whole festival was the precipitous pitch of the tents in the “blue” field opposite stretching up and away over the Herefordshire horizon. Surely no-one can sleep on a 45% slope? But equally perplexing was the row of toilets at a similar angle. Using them must be like paying a last penny on the sinking Titanic, and surely they can only hold half their capacity before beginning to leak?

Anyway enough of the technicalities.  I have to say that I found one haven of reasonable peace in the site’s “Enchanted Garden”. This grotto of luminescent installations also housed the Busking Stage, the Crap Stage and three bars that felt like bars. Home from home. Thank you TW. Thank you Apples and Snakes.

Below a huge full moon

A barn owl glides silently across the park

Below the barn owl

Tribes of transients dance to the beat of drum’n’bass

Beneath the transients’ feet

The earth shrugs and plots its revenge.

ha ha leaning latrines... my only traumatic experience that weekend.(got off quite lightly considering the state of my festival head) i never did quite made it to the one i was aiming for from the queue.
great review. a wonderful read. see you guys there next year. maybe you could look up (and perform at) Festinho ,a fledgeling festival held in suffolk first weekend of Sept. there's definately the audience.

Great review, Dave. Thanks for your company. You need to get more practice at putting things up in the dark.

My guest blogging for Apples and Snakes on a website which spawned the My Place or Yours show continues at http://myplaceoryours.org.uk/ My own write up of the show will follow asap.

Meanwhile, I was well-chuffed with this review of my set at Big Chill in trendy indie mag The Fly
http://www.the-fly.co.uk/words/blogs/5807/the-big-chill-round-up

Hope to see you soon.

Very nice, Dave. I look forward to your beat boxing debut next year followed by the album!!!!

What a great write-up. Despite being the only member of A&S staff who wasn't there, I now feel I was. Thanks for that.

Dave, your reviewing pen is insufficiently active. a joy to read.
You paint a picture that had me there with you - you sod! Leaning latrines, 45-degree tents, rain. Made me wonder why I never go to festivals.