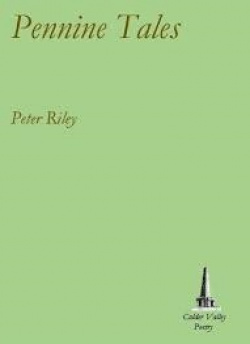 Ted Hughes would undoubtedly have approved of Calder Valley Poetry, a new small poetry press taking its name from his native West Yorkshire landscape. Its first four beautifully produced pamphlets are by Peter Riley, Steve Ely, John Foggin and Mark Hinchliffe. Two of them include direct references to Hughes, although that is where the similarities end.

Formerly of Cambridge, Peter Riley has moved to Hebden Bridge, as many poets do, in the Upper Calder Valley. In 2015 his Due North was shortlisted for the Forward prize.  His pamphlet Pennine Tales reflects his pleasure in his fresh surroundings, as well as his awareness of its ghosts. He marvels, for instance, at the late buses that turn up reliably at closing-time to take him home from moorland pubs, and relishes the canal boats and trains, too. The railway takes him back to Branwell Bronte’s ill-fated attempt “to inhabit the 19th century” in his job at Luddenden station. There are ghosts everywhere:

faint tapping in the night? It is Ted Hughes,

wishing he’d stayed in Mytholmroyd and not

been made into a hero by hungry clerks

or his wife into a martyr by ideologues.

You want more ghosts? “I walk with Wordsworth, and poor Clare, / Shakespeare, who repeatedly disappears, / and Hardy, guide and spokesman.” But Riley is not perpetually looking back. He remembers the refugees in Calais “in this vast nowhere”; yearns for the day when “society and economy are brought to support to each other”. Yes, “the capital aristocracy are still in charge”, but the beauty of his surroundings keeps breaking through; that uplifting nocturnal northern scene with “thousands of lights spread over valley and hill”. A valley beset by floods that nevertheless thrives with spirit and culture; and where public transport apparently still works. Riley is known as an innovative and experimental poet, yet the music and rhythm of these lines are available to all.

Steve Ely, a poet shortlisted both for a Forward prize and the Ted Hughes award for innovation, provides copious and helpful notes at the end of Werewolf that explain the background of his catalogue of evil and cruelty. A raped woman gives birth to twins in a death camp; these twins are “spared” for experiments. One grows up to be altruistic, the other a monster, and the many of the poems in this sequence chart their journey through life, with other poems providing contextual horrors, from the Armenian death marches of the first world war and the Rwandan genocide to the murders of children such as Victoria Climbie and Peter Connelly.

The title poem begins in post-war Germany and ends with the sectarian murder of eight Catholics in a pub in Northern Ireland in 1993: “Grey steel gun barrel, lit gaze and dripping maw.”  Amongst all this Ely interweaves a poem reflecting his experiences as a school teacher, and another from his own schooldays. ‘Would you?’ challenges the reader to consider whether he or she would take part in genocide: “Thus idealistic liberals / become strident libertarians / rainbow totalitarians …” These poems do not make for easy reading. But you can nevertheless recognise and appreciate their moral power, craft and skill.

John Foggin surveys well-known and lesser known sculptures and paintings in his pamphlet Outlaws and Fallen Angels, the first pamphlet to be published in the Calder Valley Poetry series. ‘David’ is a reflection on the Michaelangelo and Donatello sculptures, and in its language and rhythms and downbeat conclusion echoes Eliot’s ‘The Journey of the Magi: “Let us go back to our goats, / our woodsmoke; the smell of dung, / and thyme, sweat; rough-woven cloth.”

There is humour as Nelson surveys the world with a baleful eye from above Trafalgar Square: “How could my Nation have failed to know / its Savour, all his life, was Martyr to the Vertigo?” That same impish humour imagines The Three Graces as models on a fashion shoot that end up frozen in time: “So we stayed just as we were. / Professional to the core.” Antony Gormley’s Angel of the North and his figures on Crosby sands also come under Foggin’s scrutiny, as does Henry’s Moore’s ‘King and Queen on the Hillside’, a trapped couple that have nothing left to say to each other, and can only sit and stare at the landscape - one of a few unhappy endings in a collection full of wit and empathy.

“There’s a lovely lyrical completeness about your poems. So natural and full – they just float out.” So wrote to Ted Hughes to Mark Hinchliffe, whose The Raven and the Laughing Head is more of a collection than a pamphlet, if you count the number of poems. These days Hinchliffe is a director of the Elmet Trust, which aims to celebrate and promote the work of his acknowledged mentor. The influence of Hughes can been found in poems infused with magic such as ‘Mountain Cottage’, ‘Pieta’, ‘Skins’, and ‘The Wolf’; foxes, jaguars, hares, eagles and crows haunt these pages.

The penultimate ‘Last Haiku for Olwyn’ marks the death of Hughes’s sister, a guardian of his legacy; and the final poem, ‘The Hunters’, is a mystical tribute to Hughes himself: “Inside the golden feather, Ted’s heart.” But this collection is not just a series of homages; there is an engaging wildness to these poems, that appear as much at home out in the Wild West of Sitting Bull and Billy the Kid as in West Yorkshire.

These four publications form as impressive a beginning as any poetry publisher could wish for; congratulations to Calder Valley’s Bob Horne on this magnificent start.