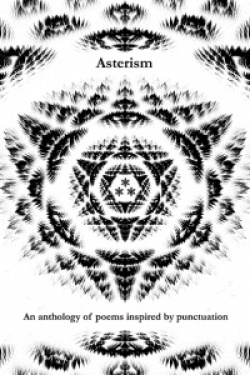 Asterism, perhaps one of the less well-known forms of punctuation, is used to indicate minor breaks in text, to separate sub-chapters in a book or to call attention to a passage. It is also a pattern of stars and an optical phenomenon in gemstones.

In this anthology, 37 poets focus their attention on a different punctuation mark. Many of them take the opportunity to explore their specific subject matter from more than one angle. This multi-dimensional approach adds to the richness of the collection.

Not all punctuation marks are present. The editor notes “the irony of the missing apostrophe” and states that other marks had not been included due to preference, time and/or print limitations.

This book is full of surprises. The fact that the collection begins with a poem by Ali Lewis on the full stop is an irony in itself. Most collections might end on that note. The collection ends with a poem by Charlotte Newman on the copyright symbol, which usually appear at the very beginning of a book.

I found it interesting to compare the energetic, rushed lines in Fran Lock’s poem on the slash, much of it achieved through the use of short phrases or single words bounded at all times by the forward slash, with the sense of vulnerability felt in Bobby Parker’s poem on the back slash which contains much longer lines and is in the form of an unbroken narrative. When pitted against each other, both poems reward the reader with a sense of having described in a very subtle way the difference between being on the front foot and on the back foot.

A dictionary entry for punctuation states that it is the act or art of dividing sentences by points or marks but there is also another meaning to do with the theory of punctuated equilibrium – a theory which states that evolution happens in short bursts of rapid change that interrupt long periods of stability. It is not beyond the bounds of possibility that some of the more elusive poems in this collection could be addressing this second biological interpretation instead of, or in tandem with, the primary meaning.

Helpful definitions on the more obscure punctuation marks is given at the back of the book together with short biographies from the contributors.

An introduction would have been useful. I would have been interested to know how the project came about and the method that was used for gathering the material for the book. Were the individual poets commissioned to write a piece on a particular mark or were they given a choice as to which mark they would write about? I can’t help thinking that a disciplined hand was at work if only to ensure that all 37 marks were included in the collection.

My only quibble is that on page 43 the symbol for an obelus, which my dictionary gives as a minus sign or a dagger sign, is represented by the mathematical symbol for division. But I lay no claim to being an expert in punctuation marks and may be missing something here.

This collection will appeal to readers who enjoy doing cryptic crosswords, have an interest in typography and enjoy reading poetry. The poems range from the exclamatory and the confessional to the visual and the elusive. Credit should go to the editor, Tiffany Anne Tondut and her team and also to the publisher, Laudanum, for coming up with this original idea and seeing it through to completion. The next time you see a punctuation mark, you may see it in a new light.

Asterism; an anthology of poems inspired by punctuation, ed. by Tiffany Anne Tondut, Laudanum, £7.05 including pp