Paris after the terror attacks: poet publishes pamphlet on the days that followed 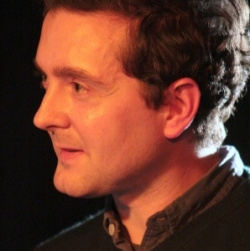 A poet based in Paris has written a pamphlet of poems about the aftermath of the terrorist attacks in the city on 13 November last year. Paul Stephenson’s The Days That Followed Paris, published by Happenstance, is made up of 21 poems that were written in response to that Friday night in 2015 when gunmen and suicide bombers attacked a concert hall, a stadium, restaurants and bars - and left 130 people dead and hundreds wounded.

A number of the poems recount the tension and fear in the city in the aftermath of the attacks. ‘Fear Is’ begins: “Fear is a fire escape that’s locked. / Fear is a carriage, a tight squeeze.”  ‘Levels of Alert’ lists and describes colour-coded levels of security alert. ‘Chairs on Pavement’ includes these lines: “Some are scattered. / Some are tucked in. / Some are spattered. / Some are wiped down.” One poem, ‘Public Names’, is made up entirely of the names of many of those that were killed.

As Paul relates on his website, Write Out Loud played a part in triggering the poems. He said: “I didn’t set out to write poems in response to the attacks. It was when Greg Freeman from Write Out Loud wrote to me a few days after the attacks to ask me if I had anything to say … that I froze. Did I? What could I possibly say that would bring a new perspective on the endless media coverage? And how could saying something possibly change a thing, or have any kind of added value?”

Paul added: “But… I did start writing, and the following fortnight was taken up with little else but making notes, collecting thoughts, fragments, stories, trying to gauge my feelings, listening to others.

“The question that troubled was: Should I write about the attacks? Did I have permission to do so? Was it right – or was it opportunistic, self-indulgent, in bad taste? After all, I was at home that Friday night and on the other bank of the river – the Left Bank, which was that night, by chance, the right bank to be on. I wasn’t harmed or injured, hadn’t died. I wasn’t out enjoying myself. I wasn’t affected. Or was I?” The poem ‘What to Say’ examines such questions: “Somebody asks me to say something. / They ask me if I will write something. / … Everything seems to have been written. / I am not certain I have anything to say.”

Paul has lived in Paris since 2013, and was a political researcher at Institut d'Etudes Politiques.He will be reading poems from the collection for the first time at the Poetry in Aldeburgh festival on Sunday 6 November.

Anthology's tribute to poetry of pubs ►