Judy Brown told a funny story at the Poetry Book Fair at Conway Hall in London on Saturday, before reading out a poem about a rat in her house.  She said she felt guilty about paying to have the rat killed, and more guilt about having a poem about it published in the New Statesman, which paid her enough to cover the cost of killing the rat. It sounded like some kind of fable, although I wasn’t sure about the moral to the tale  … 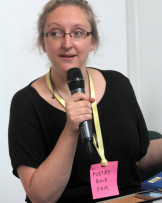 Can poetry pay for the everyday, and not so everyday things of life? Free Verse’s annual poetry book fair, organised by the tireless Chrissy Williams. pictured left, and Joey Connolly,  provided a marketplace for more than 80 publishers to publicise and often sell their wares, and a series of readings where poets could promote their books. It is also an immensely cheering occasion to meet and greet friends and acquaintances in the poetry world. 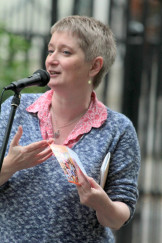 Stonewood Press has come up with a new wheeze to market poetry – trading cards. They describe Traverse as “beautifully designed poetry cards for you to collect and swap with other poetry lovers”. At their launch event at the Garden café in Red Lion Square publisher Jacqueline Gabbitas, pictured right, explained that it was another “slightly eccentric project to raise money for Stonewood Press, and to get more people reading poetry”. Dubbed “Put a Poet in your Pocket”, the cards also contain “info, factoids and tasty trivia”, and are marketed in packets of three.

There were encouraging words for poets offering something fresh from Adele Ward, of Ward Wood Publishing, at a panel discussion with fellow poetry editors Ed Doegar of The Rialto magazine, and Jennifer Grigg of Green Bottle Press: “They say everything’s been written before - I don’t think it has, actually.” 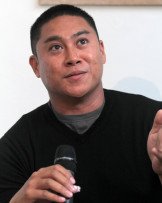 And there was a timely reminder that it’s not all about money, or yourself, at the other panel discussion, on poetry and politics.  Filipino American poet RA Villnaueva, pictured left, who is currently living in London, told how he and other Asian- American poets were invited to read at the Library of Congress in Washington, when 90 miles away Baltimore was under a state of emergency as a result of protests after the death of Freddie Gray, an unarmed black man, in the back of a police van.

He said “Each of us read something by a black writer that meant something to us. After the reading we were gently chided for this - ‘It just wasn’t the right time or place’ - at a very nice dinner, at the long table.” He added: “Poetry and politics are indivisible, even if we’re not ostensibly writing about politics … When I enter the room, I change the dynamics of the room. To write poetry is a political act.” 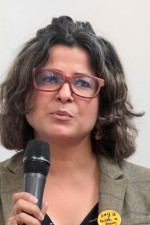 Sophie Mayer spoke self-deprecatingly about Poems for Pussy Riot, the anthology she co-edited in support of the jailed Russian punk group: “Poets are not necessarily effective, but we can decide which side we’re on.” WN Herbert explained his role with the New Boots and Pantisocracies protest blog, originally set up in response to the 2015 election result, and now continuing after the Brexit vote. (An anthology is on the way). And Kurdish poet Choman Hardi, pictured right, said quietly: “Some of us don’t have much choice on what we write about,” before reading a poem about Kurds gassed and killed by Saddam in the late 1980s.

It was cheering to find a poem by one of Write Out Loud’s own, Laura Taylor, included in Poetry Almanac 2016, a Free Verse innovation this year. It’s a comprehensive guide to the year’s poetry and poetry publishers, and was selling for £10 in the foyer of Conway Hall as you came in.

More than 600 did during the day, apparently. Summing up the general mood of bonhomie and hail-fellow-ness at the Rialto Pamphlet Poets reading later in the evening at the nearby Square Pig & Pen pub, Richard Scott enthused: “Other than my birthday, the Poetry Book Fair is my favourite day of the year!”

◄ 'This window, it's pane-less. It's only a frame of air'

Stand up and spit it out: chance to have your say on ranting poetry nights ►