The Poems of Basil Bunting: ed. by Don Share, Faber 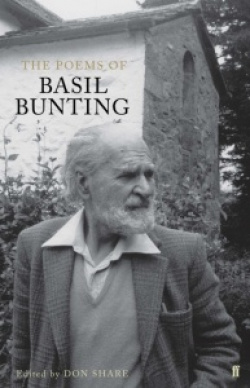 Firstly, let’s get certain issues out of the way. This is an expensive book, a solid, serious-looking and weighty hardback, not a paperback you could take on the beach or read on the train. It’s intended for study. It contains pretty much every surviving poem that Basil Bunting wrote, including school poems and fragments and “false starts”, and that only takes up half the book. The rest is notes, textual variants and appendices.

Hence the steep price. Most poetry books are around £10 or a bit more for a Collected. If you want to read this book, I suggest you try and get it from the library, or ask for it as a Christmas present.

Is it worth the money? I would say, every penny. Basil Bunting was one of the greatest British poets of the 20th century. His greatest poem, ‘Briggflatts’, is essential reading for anyone interested in poetry in these isles. For many years, his poems were only published in small press editions from Migrant Press or Fulcrum, until Oxford published him in the late 70s. Yet he was, along with Pound and Eliot, one of the most important poets of his time.

The best way of convincing you of his importance is the quote the first verse of ‘Briggflatts’:

each pebble its part

for the fells’ late spring.

May on the bull’s hide

and through the dale

furrows fill with may,

The language is simple and the rhythms Anglo-Saxon. The setting is in the north of England (Rawthey is a river in the North Pennines.) There is not a word wasted and the strangeness of the bull’s tenor voice leads us to want to read on, to find out what’s coming next.

The notes to the poems are an extensive and help us to put them into context, including quotes from Bunting himself on the composition of the poem. So: “The bull I noticed one day in a farm near Throckley where I was living at the moment, and you know, it struck me, at once, nobody had noticed it has a tenor voice. You hear of the bull bellowing and this, that, and the other. But in fact he bellows in the most melodious tenor, a beautiful tenor voice.”

The poems are divided into ‘Sonatas’ – his longer poems, often with a vaguely musical structure like a sonata; ‘Odes’ – shorter lyric poems; and ‘Overdrafts’, which are translations or versions of poems by various other poets, including several classical Persian poets. An appendix gives more information on his love of Persian poetry; during the second world war he spent time in Persia as a diplomat and spy.

Because this is essentially a complete poems, it does include everything. His surviving school poems are really just apprentice pieces and some of the false starts are not that interesting, but to someone who wants to study Bunting, it does give an insight into his writing process, which was very careful, very much about getting the words right, getting the rhythm just so, and almost carving the poems out of the rock of language. In fact, he recommended “taking a chisel to write”, like the mason in ‘Briggflatts’ carving his memorial stones.

This book itself is something of a monument. The amount of critical information (notes, variant readings etc.) could make this a daunting read for the ordinary reader. I would recommend new readers starting with the Bloodaxe edition of 'Briggflatts', which includes a DVD of Bunting reading it. To those of us who love Bunting, this book is both welcome, in that it increases our knowledge of this knotty poet; and a bit of a worry. Bunting deserves to be read, preferably aloud, not dissected and analysed as a mere specimen.

Therefore, I’m going to end this review by quoting one of his odes, from 1964:

A thrush in the syringa sings.

by hawk’s beak, by stones,

by cat and weasel, die.

From a shaken bush I

The Poems of Basil Bunting, edited by Don Share, Faber, £30

'I drinking deep of everything I saw, now mine to keep' ►

Review » What I Heard on the Last Cassette Player in the World: Ben Ray, Indigo Dreams

Thanks for your comments! I've been a fan of Bunting for years, and although it is a massive tome, it is a great book.

How on earth do you manage to write such a fascinating review of such a tome? It does amke me want to get into his poetry (confession there). Hats off to you, Steven. It reminded me, too, of the Briggflatts Quaker meeting house I oft visited when I lived round the corner, in Dent.

I'd like to echo what Greg has said. Bunting can teach us how to write tightly while remaining clear.

You mention Fulcrum as a publisher. Your review has got me to look out the Fulcrum 'Collected Poems' bought years ago, to read again.

Thanks, Steven, for this informative and warm review of a quite legendary poetic figure. There were some events to commemorate the 50th anniversary of 'Briggflatts' a couple of months ago, and I commend this "Ten things you may not have known about Basil Bunting" by editor Don Share, including the fact that Mark Knopfler of Dire Straits was a copy boy (ask yer granddad) on the Newcastle Evening Chronicle in the 1960s when Bunting was working there in obscurity, as a sub-editor on the racing desk https://www.faber.co.uk/blog/basil-bunting-briggflatts-at-50/