Say Something Back: Denise Riley, Picador 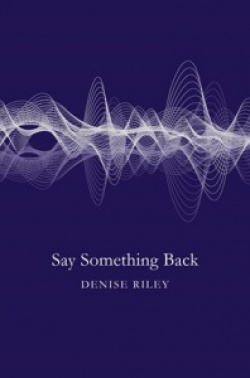 Perhaps the most appropriate response to the death of a child remains Lear’s “Howl, howl, howl”. But, if this book is such a howl (and it is), it’s an eloquent, beautiful, intelligent howl, one that goes straight to the reader’s heart. Without any of the anodyne sentimentality that sometimes accompanies writing about bereavement, this is the very “literature of consolation” sought by Riley in her essay Time lived, without its flow. In that essay, and in these poems, she describes the “shared a-temporality” of the mother and her dead son which may become “a companionate exile”. Though the mother has been “untimely ripped” and her child’s life has been “gouged out” of her, so she is like an empty Russian doll, ultimately his spirit may be internalised, a victory of a kind.

The collection begins with ‘A Part Song’, winner of the Forward single poem prize in 2012 (the book is shortlisted for this year’s Forward prize). It is a landmark long poem or sequence of recent years, one of those poems everyone remembers reading for the first time. What is so extraordinary about it is its tone, a fond, intimate, almost humorous one-sided conversation with her son: “What is the first duty of a mother to a child?/ At least to keep the wretched thing alive” or “Oh my dead son you daft bugger/ This is one glum mum. Come home I tell you”. This poem, number vii in the sequence, ends: “by now / We’re bored with our unproductive love, / And infinitely more bored by your staying dead / Which can hardly interest you much, either."

It is all a desperate attempt to make him “say something back”, and in the final poem of the sequence, wonderfully, through the power of literature, of song, he does:

My sisters and my mother,

Weep dark tears for me

I drift as lightest ashes

Under a southern sea

O let me be, my mother

In no unquiet grave

My bone-dust is faint coral

Under the fretful wave

In an interview in Shearsman magazine, Riley remarks: “The only constant [in my work] is a commitment to the thing that is song. This is in some way linked to the persistence of hope ...” Song “is plain bright mystery”.

Riley is a masterly lyrical formalist and the middle part of her book displays a dazzling variety of forms, many self-invented and very modern-sounding, some quatrains with a 17th century or a Wordsworthian (as in the Lucy poems) air, pure lyrics, some hymnal.

“Rhyme”, she says, perhaps like all form, “marries the material and the ideal”. These poems are erudite, allusive, sometimes pictorial, always infused, instinct with thought, but never opaque. They are about death, yes, but they always strive towards light, towards a resurrection: "Hope is an inconsistent joy / Yet blazes to renew / Its lambent resurrections of / Those gone ahead of you." (‘You men who go in living flesh’). Since time has ceased its flow with the death of her son Jacob, Riley’s effort is to “defrost” time, “to make rhyme chime again with time / I sound a curious lilt.”

Arthur Conan-Doyle lost his son in the first world war and believed he made contact with his spirit through a medium. He said he had become “a gramophone on the subject’, which phrase Denise Riley takes, with grave self-mockery, as the title of the final, superb sequence of her book. It was written for the Poetry Society’s The Pity, a commemoration of the 1914-18 war, on the centenary of its outbreak. Riley has spoken of the influence on her of Isaac Watts’ hymns, and one inevitably remembers here “Time, like an ever rolling stream,/Bears all its sons away.” A theme of her essay, as of these poems - which use real testimony to great effect - is that, when one loses a son (as I too have), one becomes another of the millions of people who have lost a child. The last lines of the sequence are:

What to do now is clear, and wordless.

You will bear what can not be borne.

Terence Dooley’s pamphlet The Why of It will be published by Argent Press this autumn, and his translation of Eduardo Moga's Selected Poems will also be out soon with Shearsman.

Denise Riley, Say Something Back, Picador, £9.99

◄ Write Out Loud Woking at the New Inn tonight

this is an excellent review of a really great book of poems. to remain true to an artistic vision, and to instill a sense of grace and hope in such a dark subject matter is really quite mindblowing. i came away moved but not pitying, the character of the author shines through beautifully. some of her work reminds me of the director todd solondz who directed happiness and welcome to the dollhouse. pitch black but somehow funny and deeply hopeful.