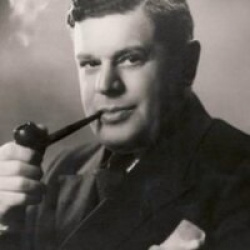 He is a poet who is listed as an “official contributor” on the World Economic Forum’s website. Brian Bilston (not his real name) has also been dubbed poetry’s Banksy, and the poet laureate of Twitter.

His Twitter persona is that of a middle-aged man with a pipe. In an interview with BBC Radio 4’s Today programme on Monday he gave away few clues as to his real identity, saying only: “I’m Brian most of the time … I’m mainly Brian.”  On his own website he describes himself in the third person as “a poet clouded in the pipe smoke of mystery. Very little is known about him other than the fragments of information revealed on social media: his penchant for tank tops, his enjoyment of Vimto, his dislike of Jeremy Clarkson.”

His work has sometimes taken the form of Excel spreadsheets, Venn diagrams, Powerpoint presentations, and Scrabble tiles. A first collection, You Took The Last Bus Home, which was successfully crowdfunded within three days, is due to be published later this year.  His poems respond to contemporary events, often in a wry way. As Brian says: “I write about Waitrose. / And the pitta of Waitrose. / The poetry is in the pitta.”

Whoever he is, the World Economic Forum has commissioned Brian, who has many thousands of followers on Twitter, to write a series of poems on “The Fourth Industrial Revolution”, which the forum says “is characterised by a fusion of technologies that is blurring the lines between the physical, digital, and biological spheres”. One of Brian’s commissioned poems, ‘A Life Sentience’, imagines a smart, digitalised home in which all the domestic appliances that usually go wrong from time to time are “optimised / into tyrannical perfection”.

His most popular poem, ‘Refugees’, turns an apparent uncaring attitude on its head, by re-reading the poem from the bottom up – a poetry form that is known as specular, and was pioneered by the poet Julia Copus. Here it is in full:

They have no need of our help

So do not tell me

These haggard faces could belong to you or me

Should life have dealt a different hand

We need to see them for who they really are

With bombs up their sleeves

We should make them

Go back to where they came from

Build a wall to keep them out

It is not okay to say

A place should only belong to those who are born there

Do not be so stupid to think that

The world can be looked at another way

Tree planting in memory of John Clare at nature reserve ►