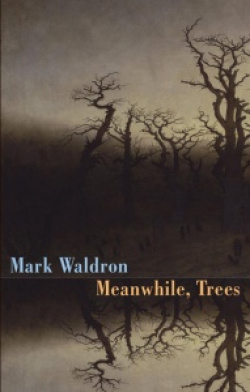 The landscape of British poetry has changed in the past decade with more and more work of high quality being published by magazines, small presses and the established publishing houses. These fundamental shifts have included an explosion of style: while the old dominance of Movement poetry with its conservative lyrical sameness continues in some quarters, its aspiration towards a universal voice is undercut by self-mocking humour. And alternative voices are rising, perspectives are fragmenting, the drive for narrative coherence increasingly thwarted.

Mark Waldron is such a voice: a poet whose surreal imaginings resist easy paraphrase, whose work offers vividly unusual perspectives as a path towards understanding. "Too much of poetry that’s admired is like the equivalent of nice watercolours," Waldron has said, his own work owing more perhaps to Dali or Magritte in its hyper-real rebellion against middle class complacency. Born in New York but brought up in London, Waldron starting writing poetry in his early 40s alongside a career in advertising. He found immediate acclaim, publishing two collections with Salt, The Brand New Dark (2008) and The Itchy Sea (2011). The Brand New Dark was chosen for the Poetry Book Society’s Next Generation Poets promotion in 2014. Meanwhile, Trees was published by Bloodaxe in May this year.

Given the innate strangeness of the poems in Meanwhile, Trees - the way in which they problematise our perceived realities - approaching them for the purposes of review proved a tricky task. I think – hope – this is what the poet is partly aiming for, to disorientate and then re-orientate the reader. This sense was prompted of course not only by repeated re-reading but also by the blurb on the back of the book, which announces that the poems "aim to see if there’s a way of looking and a way of using language that can bring some meaning back to the world". A tall order perhaps, but Waldron has a good shot at it.

The character in Waldron’s poems might be a cat, or Richard the Lionheart, or a hydrofoil, but they are all, essentially, the poet offering another point of view. Waldron says of his work: "I regard everything I write as being about me. It’s just that I might dress up as a dog or a prince or a hydrofoil or a stone before I embark on a poem." Dressing up as a cat, or representing himself as two separate characters, or embodying himself as a falling vase, allows the poet to distance himself from the universal ‘I’. But perversely the impact of this distancing is to allow the reader to access a side of self they might not have explored. In ‘A cat called Orangery was in a number of movies,’ the poet explores a cat’s consciousness until finally suggesting that being a cat:

would make us blind to everything that from up here

we are able to see,

and open up, at last a sharp slick world full of certainty

and ease of feeling.

If Dali and Magritte are Waldron’s antecedents in painting, then John Donne takes that place in poetry. These are poems as conceits, most obviously perhaps in ‘Uh-Oh Sweet Wife’, where Waldron tips his hat to the master, imagining the entire physical world as his "other beloved", "my infinite/intimate, the world, my mistress world." This is taken to its apotheosis in the sequence towards the end of the book involving Manning, a character who represents the poet’s alter ego: "I own him very much/as some people own bees," the poet writes. Through the conceit of self as Manning the poet can write about himself in tones that might not be available if he were writing in the first person, distance himself from the sides of self he is ashamed of, or despises, including a disturbing crassness:

His member (though my gaze, I can assure you,

recoiled from it with more haste than a hand would

from a hot coal) looked something like a monstrous

jewel in the setting of the surrounding grey fabric

These poems are relatively long, several running to more than one page, using long lines or, in some cases, going the whole hog and becoming prose poems. This is not to say that Waldron does not use the poetic tools available to him. Opening the collection at a random page I find ‘The Tenant’, for example, where the lines are shorter and organised into couplets, slowing down the reader’s view of air filling an emptying can:

air moves in. Some portion

of the air wakes up,

reclining dozily in space and drops

quick into every virgin crevice

of that fresh vacuity

The action of the air is emphasised in the line and stanza breaks, the narrative slowed by them and yet quickened by alliteration ("quick", "crevice", "vacuity"). The poem ends:

it’s made of it a rich stock that is

the vivid ghost of that exact place.

Waldron has said that he writes to get a meaning across and whilst these are difficult poems he largely achieves that aim. Occasionally the metaphors do not work, or are so complex as to undermine themselves, or are too opaque (‘The Sea’, ‘Innovations in Naval Gunnery’). But the vast majority of the poems in this collection offer a striking glimpse of the world that surrounds us but, like Orangery the cat, we cannot access. Reading them properly is work, but worth it.

◄ Publisher achieves his quest: anthology of 'faith, doubt and wonder' is launched