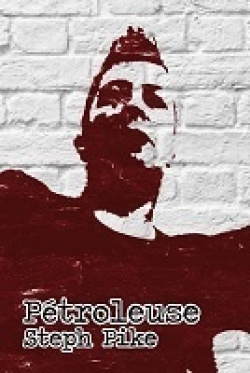 With the inflammatory title of Pétroleuse and a scarlet stencilled image of the artist against a whitewashed brick wall, there is already ample signposting that this poetry collection is not likely to contain inoffensive little odes to kittens, fluffy bunny rabbits, or, indeed, daffodils.  It smacks of discord from the off, and I am reminded yet again of the ungrounded adage “never judge a book by its cover”; this second collection by Steph Pike is already shouting “READ ME!”.

Once again, a performance poet fulfils their alternative role as cultural and political historian, and Steph doesn’t just talk the talk, she walks the walk, with a background firmly rooted in feminist socialist activism, as well as being a committee member of the People’s Assembly. Make no mistake, this is a poet with a very definite agenda.

Feminism runs through this collection like candy stripe through Brighton rock, starting with the introduction penned by the author, in which she reveals the origin of Les Pétroleuses.  The term was coined by the enemies of the Paris Commune to “discredit the women of Paris who were instrumental in starting the revolt that led to the Paris Commune” as “un-feminine furies”. In a contemporary act of linguistic reclamation, Pike uses the term in a powerful and positive sense, and hands it over to all women who fight to wrest control back out of the hands of the powerful and dominant.

We crash from the rousing and informative introduction straight into the declamatory ‘We Will Not Be Deodorised’, with its fierce dismissal of

… your laws, your lies

your prejudice, your expectations

your science, your biology

your definitions of who we should be

we rejoice in fat and muscle and hair

we stink of blood and sweat and skin

we will not be deodorized

we will not smell of the sterile chemistry of your misogyny

Throughout the collection, she pulls stories from history, shows them to us with a questioning Have you seen this? Did you know about that? In ‘Amstetten’ we see how institutionalised sexism and misogyny lead the British press, after Elisabeth Fritzl escaped from 24 years of captivity at her father’s hand, to analyse what went wrong with Austrian society that could allow this to happen, when the finger should really be pointed at “our modern civilized society where 95% of rapists go free”, at the

because I look around me

and women naked in pages

in papers and mags

and a nip and

to give men a

and we don’t understand how Amstetten happened

The point is driven home with another chilling example pulled from real life in ‘Manslaughters’, a poem based on court evidence given by Victor Tabak at his trial for the murder of Joanne Yeates in 2010

I walk past her kitchen window

she catches my eye, flirtatious

the way women do

I knock on her door

green light! I move in for a kiss

I have to shut her up

I do what anyone would

I grab her throat, light

not tight at all, I barely squeeze

In ‘Age 7’ we’re shown how the rot starts early, as parental and societal attempts to manipulate gender identity and sexuality, with the reward of approval, are epitomised in a “bile yellow dress”

she was not the girl

you chased with a belt

and who, for the first time,

smelt her own fear

she was not the girl

who disappointed your days

she was all things nice

the apple of her daddy’s eye

Alongside the polemical pieces, including the magnificent goosebump-raising ‘Suffragette City’, a paean to feminists past and present

know this; you are not forgotten

you will never be alone

because whenever and wherever

they try to bring a sister down

and the reclamation of ancient (almost always male) song-forms in ‘She Shanty’, there are shades of Shelleyan verse in ‘Bedroom Tax’, echoes of The Ragged Trousered Philanthropists in ‘Welfare to Workfare’, captivating and intelligently-wrought ekphrasis in ‘Angels of Anarchy’ (which repays several readings and a little research on the original art), and poetic reportage from the front line of activism in ‘Kettled’.

Don’t think for a second that this poet is a separatist, however, with damaging division as her aim.  In 'EDL' she identifies and recognises the manipulation inherent in society’s treatment of male youth too, specifically those working-class boys who are

too scared to grieve

their broken dreams and shattered lives

too scared to cry

with anyone and anything that’s different

while the BNP sit swaddled

in the greenrooms of the BBC

through the radio and TV

Hierarchies are smashed repeatedly in this outstanding collection, and that good old-fashioned reliable mode of destabilising them is brought to bear in the wonderfully carnivalesque final poem ‘I Want to Fuck David Cameron’

I want to be the divine Mrs C

I want to tweak his ruddy cheeks

run my fingers through his thinning beige hair

rub my body all over his sliced white-dough physique

I want to wear a twin-set in pastel blue

ride with him on his

I’m going to wear a hoody – just so

he’ll hug me and fill me with his Tory love

I want to be a single mother

anything so he’ll use me

in a moving photo opportunity

The restraints of control, manipulation, creating division in order to rule are integral to Pétroleuse, as is the refusal to accept, and the intention to defy, the established order.  This is a battering ram of a collection - powerful and passionate, furious, unafraid, unquiet.  It is also delicate, sensuous, inclusive, intelligent, and with much scathing hilarity to be enjoyed, and I thoroughly recommend that you do.

'What struck me first was their panic' ►